- jueves, febrero 05, 2015
Note to self: remember to check your twitter messages frequently. Check this one out:


The tweet refers to the jaeger photographed on the Pedasí pelagic of October 25. 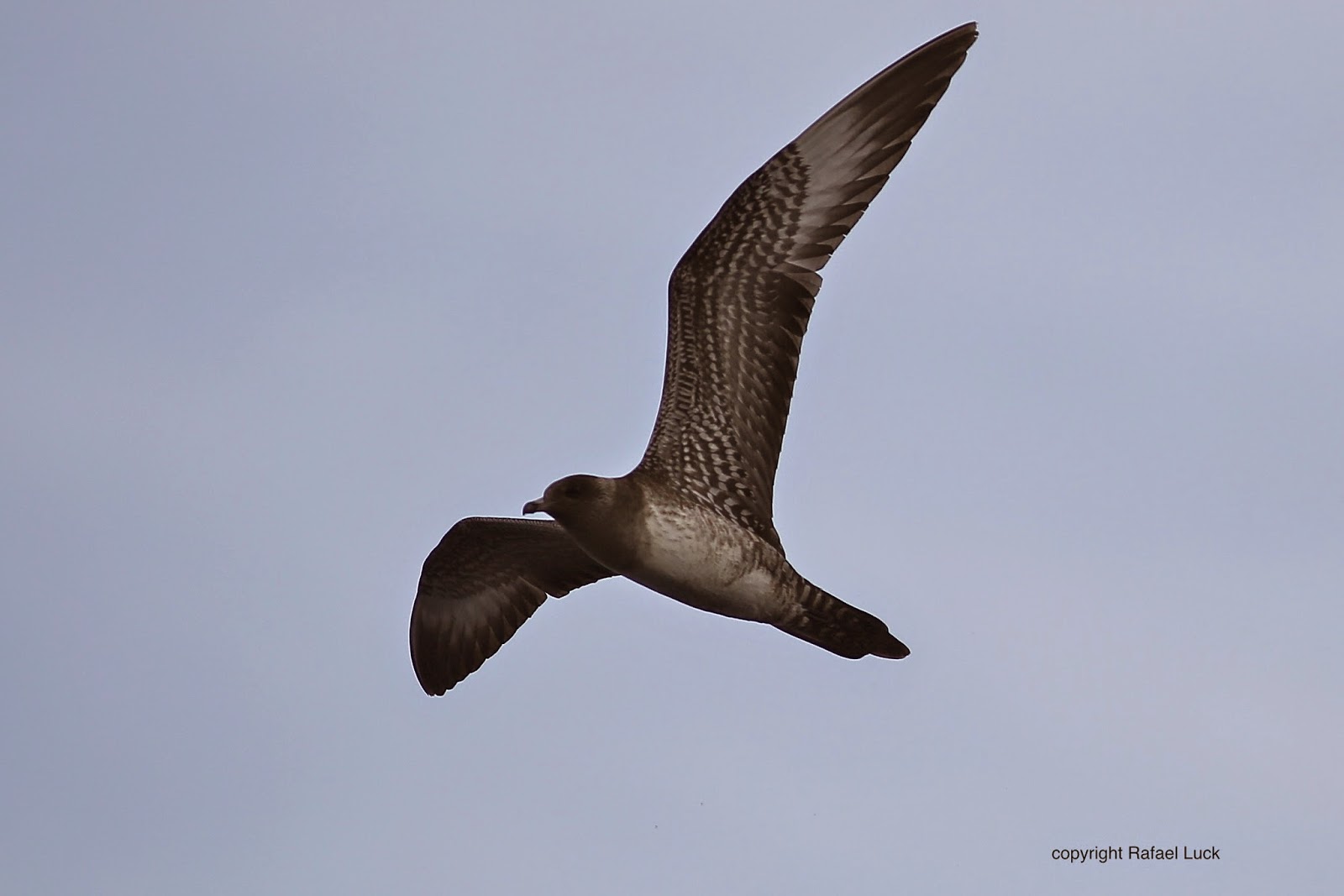 
I'm attaching the photos that Rafael took of this bird during the pelagic trip... four in total with just fractions of second of difference between them.  Number three is the photo that appears in Xenornis.  These photos were cropped and lightened... no changes were made in hue, saturation, exposure or sharpness. 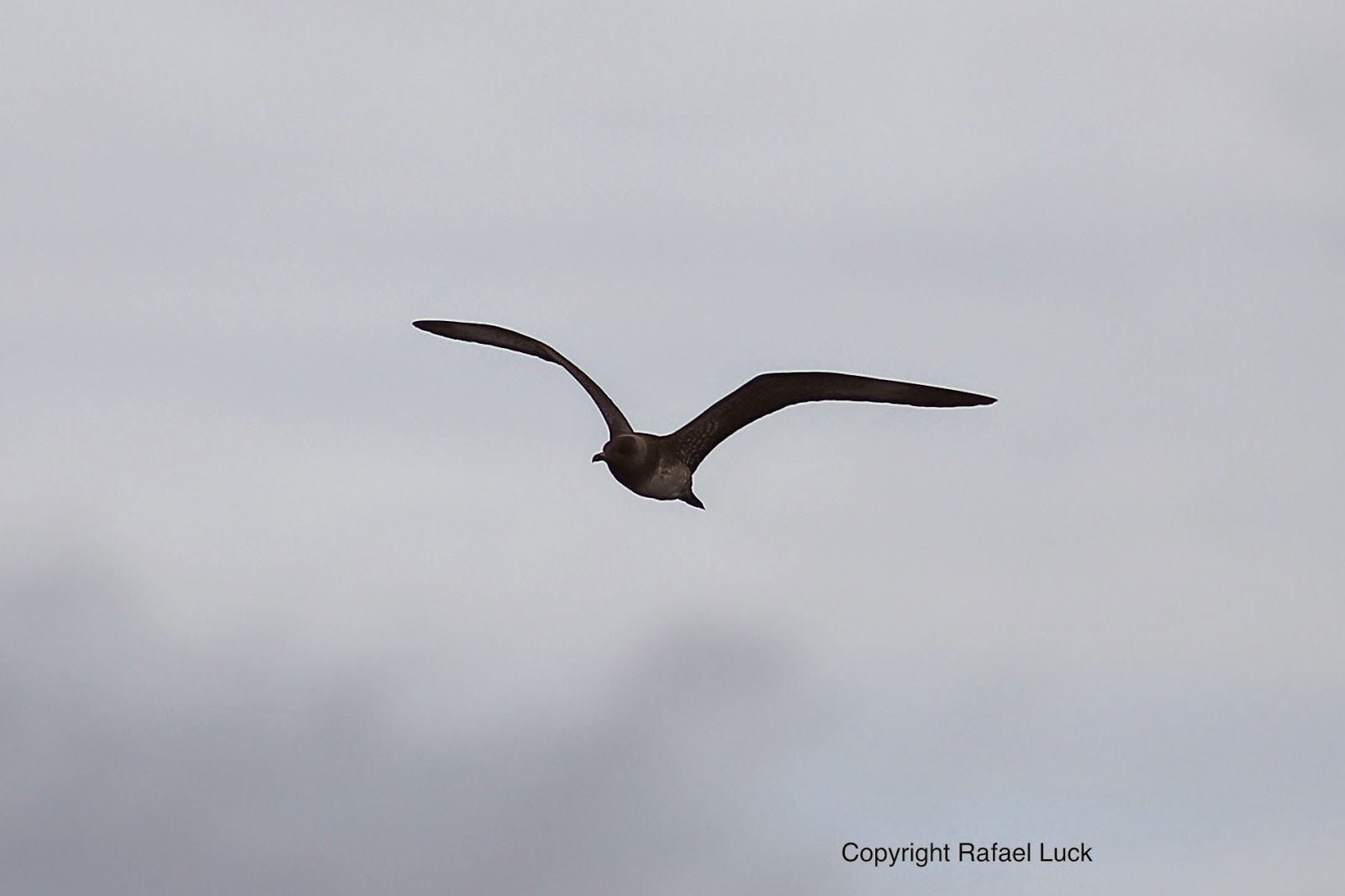 The only thing I remember about this particular individual is that it looked like a shearwater at the distance... in fact, I first shouted "shearwater" to the group when I first saw it... then it flew directly to us (as you can see in photos number 1 and 2) and it was then evident that the bird was a jaeger. I don't know exactly why we called it Pomarine at the time.  The truth is that, while editing the photos, I was not happy with this guy because no Pomarine photo in the web matched him. 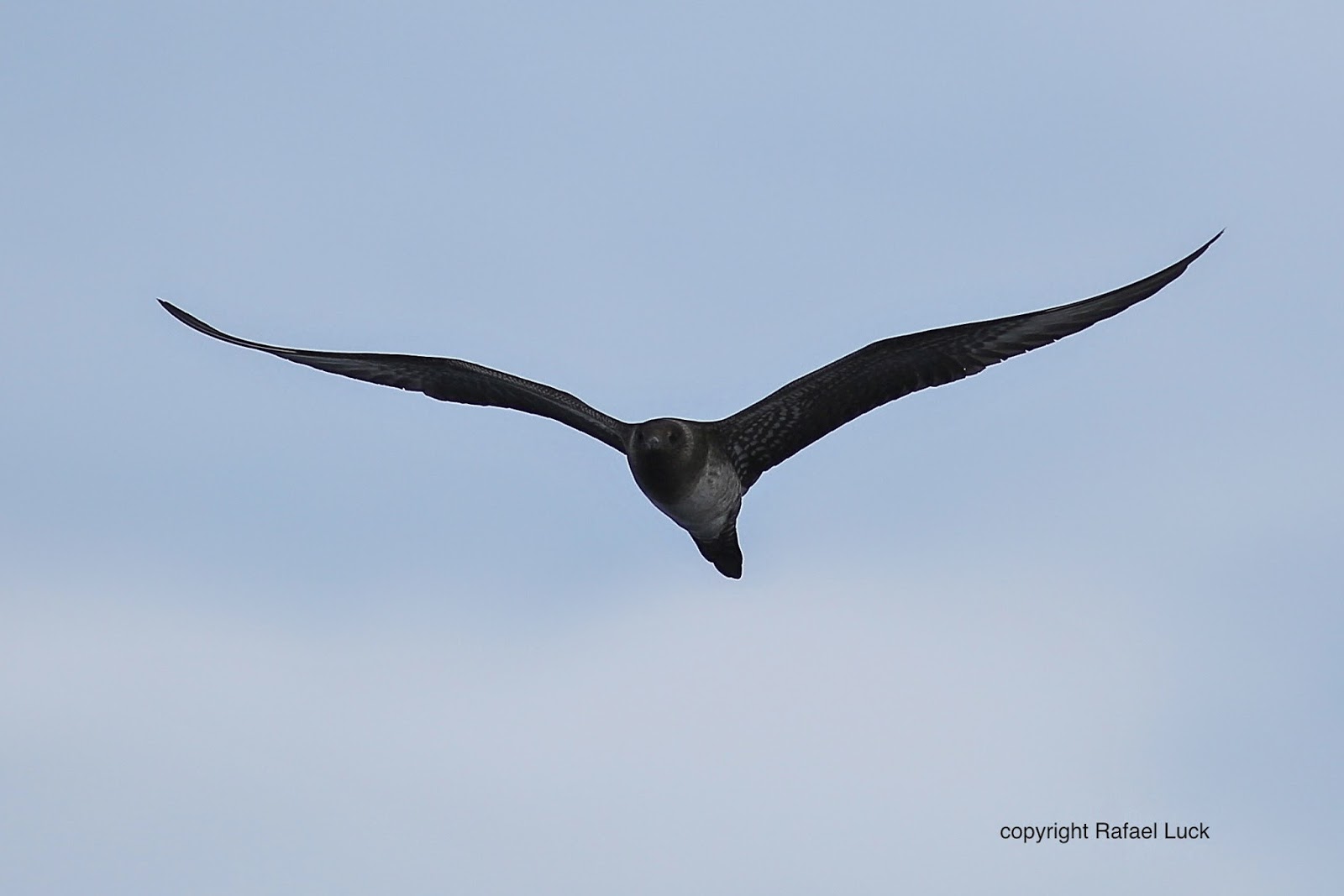 All the photos shows that this bird looked quite proportioned... I mean, it doesn't look small-headed with a bulky body like both Pomarine and Parasitic Jaegers.  And proportionally long-tailed (not considering the elongated central rectrices) with long, pointed wings.  Compare with Kaufman's illustration. 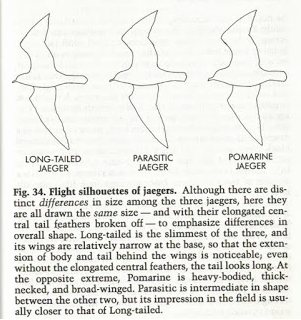 This certainly is not an adult bird... and the pale nape and whitish underparts make me think this is a light phase juvenile.  There are no buffy, rufous, orange or yellowish hues to the feathers... this bird appear all brownish/grayish/whitish... but color and hue can be affected by light conditions when the photos were shot.  The most impressive feature is that all the underwing and, specially, the undertail covert is neatly barred.. a feature shared by both Pomarine and Long-tailed Jaegers.  The Parasitic Jaeger shows messily barred undertail (and uppertail) coverts.  Another feature that is evident immediately are the elongated central rectrices.  These are rounded (probably the reason why we called this a Pomarine), and not pointed as supposed to be for Parasitic Jaeger.  However, after reviewing several illustrations in the web (Kaufman, Pyle... check this post for example), it seems that this is not a definitive field mark.  A closer look at photo 3 shows that these rectrices are bordered in white... supposedly ruling out Parasitic.

The bill shape and size is difficult to evaluate from these photos.  Notice that photos 1 and 3 shows a short bill while photo 4 show it long.  Certainly, all these is due to angle.  Analyzing photo 3, I can see that this bird have a short bill (well, I'm sure I would not describe it as a big, heavy beak).  The gonydeal angle in the lower mandible is evident... and the nail (the black part of the bill) covers almost half of the bill extension. This feature seems to be typical for Long-tailed Jaegers (and I'm attaching the Sibley's illustration... there is another illustration showing this in the link above), with both Parasitic and Pomarine Jaegers having nails that correspond to 1/3 of the bill extension (with Pomarine exhibiting a heavier-looking bill than both Parasitic and Long-tailed Jaegers). 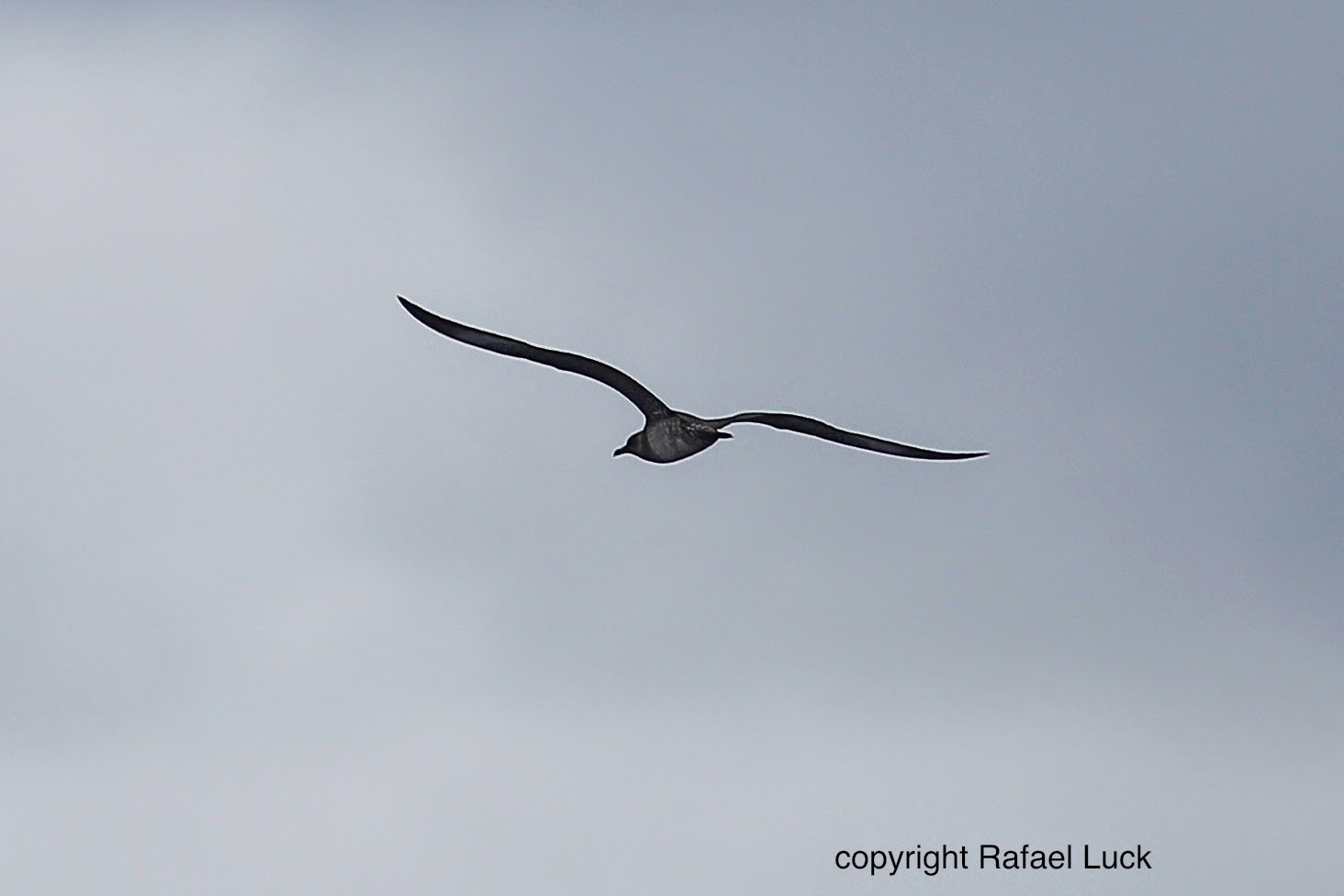 It is a shame that we don't have upperwing shots... only photo number 2 shows the white shaft of the first primary feather in the right wing.


A 100% Long-tailed with the very typical slender wings, short rounded head with short bill (in shape recalling Mew Gull), slender body and the clearly elongated central tail-feathers with are narrower than in Pomarine but with similar rounded tips. Also note the clear and evenly distributed black and white under wing-coverts barring, lacking the paler bases to primaty coverts of most Pomarine (and many Arctics). The whitish underbody contrasting to darker head further adds to the ID and the birds is so cold-tinged that it is only seen in Long-tailed.

So, there you have it. The second confirmed record of Long-tailed Jaeger from Panama. Start getting those cameras ready for the next Pedasí pelagic!
long-tailed jaeger