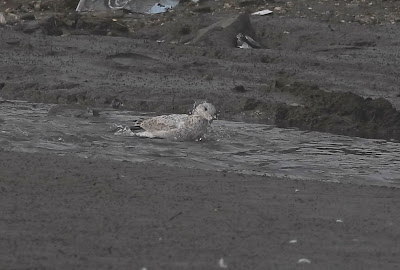 Itzel Fong photographed this first-winter Ring-billed Gull taking a dip in one of the puddles by the new visitor center at Panama Viejo. The Southern Lapwings were also at Panama Viejo, but the Black-necked Stilts were at Costa del Este.
Leer más... 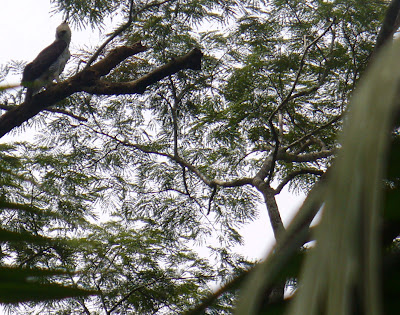 Gonzalo Horna photographed this juvenile Ornate Hawk-Eagle at noon on November 22 about 300m from the southern entrance to Old Gamboa Road. The bird flew in and flushed a Collared Forest-Falcon that had flown in in response to tape playback. Ornate Hawk-Eagle is very rare in the Canal area, especially this close to the continental divide, with just a handful reports from Pipeline and Achiote Roads.
Leer más...

- sábado, noviembre 22, 2008
On November 6, Rosabel & Karl Kaufmann and Delicia & Darién Montañez drove out to Yaviza and El Real, Darién, in search of all those potential lifers they had been missing out on. As we approached Yaviza at around noon, we stopped at some promising marshes, about 7.5 km before town. After a few scorching minutes Rosabel spotted a female and young Large-billed Seed-Finches in the brush while a male or two sung from exposed branches nearby. Also heard at the spot was a Little Cuckoo. At El Real, no additional seed-finches were seen at the airstrip, which was also devoid of Yellow-hooded Blackbirds. As dusk approached, and after the rain stopped, a Donacobius scolded us from the grass while a singing Willow Flycatcher made brief appearances. The first of many flocks of Spectacled Parrotlet and Black Oropendola . The next day and a half produced Pale-bellied Hermit, Yellow-breasted Flycatcher, Red-billed Scythebill, possible first Darién records of Sharp-shinned Hawk, Tropica
Leer más... 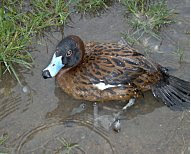 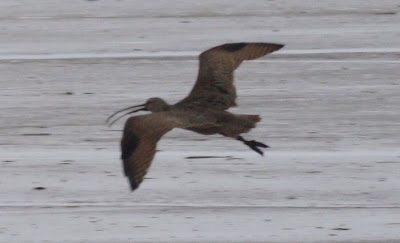 This Long-billed Curlew was photographed on October 5 by Itzel Fong at the usual spot in Panamá Viejo: on the mudflats between the new and old visitor centers.
Leer más...

This flock of Black Skimmers (part of a flock of 12) was photographed by Karl Kaufmann this afternoon, whilst shorebirding Costa del Este with Brian Watts and Bart Paxton from the College of William and Mary, George Angehr, and Rosabel Miró. Also seen in the area was Long-billed Curlew, which seems to be a yearly visitor to the upper bay of Panama.
Leer más...

- lunes, noviembre 03, 2008
I wanted to send in a report for Xenornis of some of the more significant sightings during my visit for the last half of October. On October 17th, Danilo Rodriguez and I heard (only) a pair of Stripe-cheeked Woodpeckers on the Caribbean slope of Las Minas Trail, near El Valle (good audio was captured). These birds have now been present in the area for at least 5 months, and we are on the alert for signs of breeding. Other good finds at Las Minas were a calling Black-headed Antthrush, large numbers of Black-and-yellow Tanagers, a Spot-crowned Barbet, a pair of amorous Ornate Hawk-Eagles, a point-blank Wedge-tailed Grass-Finch, and a flock of at least 10 Yellow-eared Toucanets. A field trip to the western limits of Altos del Maria on 10/19 (also with Danilo) yielded Black-crowned Antpitta, Red-faced Spinetail, Spotted Barbtail, White-tailed Emerald, Snowcap, Rufous-browed Tyrannulet, and Purplish-backed Quail-Dove. On 10/22 I took a trip with Danilo, Eliacer and Rodrick Rodriguez to
Leer más...
Más entradas