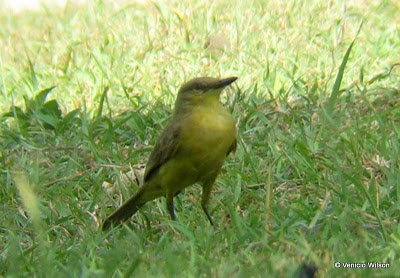 The first day included Cattle Tyrant seen after a thorough search of the Amador area. On our second day we birded Bayano Road and the trails described in the book “Where to find Birds in Panama”. We got a Pearl Kite to begin the morning and White-eared Conebill, Black Antshrike and Rufous-winged Antwren. During the afternoon we visited the trail across marker 7 km where we found the Golden-green Woodpecker reported previously . We later stoped at Río Mono bridge, where we got a odd looking bird that I called Cinerous Becard. Later during the trip we got better views and discovered the nest and reidentified the birds as One-colored Becards.  Next Day we visited Birders' View in Cerro Azul. Nando, who takes care of the place and is an outstanding guide for the area, took us around the new trails and showed us briefly a Tawny-faced Quail . After our picnic lunch we saw an Ornate Hawk-Eagle gliding fast in front of back terrace. During our 5th day, from the veranda of our shelte
Leer más... 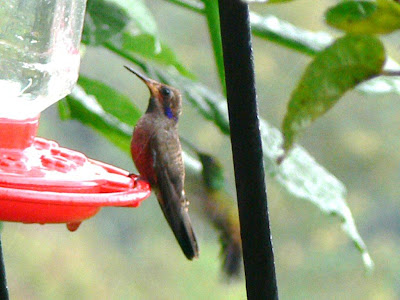 This Brown Violetear was photographed today at the barranca in Alto Boquete. Quoth J, the photographer: Finally got a photo (took it a few minutes ago) of the Brown Violetear. The last time this guy was here was July 2007 when he hung out for about a week. Anyway it's nice to finally prove this bird gets to this area.
Leer más...

Cerro Santiago and Fortuna, a report by Ken Allaire 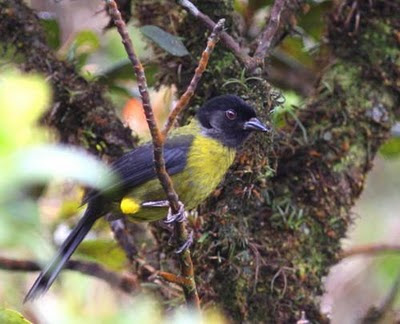 This weekend Björn Anderson, Euclides Campos and I took a whirlwind trip to Chiriquí to seek out a few target birds. On Saturday we visited Cerro Santiago; Yellow-green Finch [a Panama endemic listed as Vulnerable by IUCN ] was found easily (photo by Björn), almost from the moment we stepped out of our transport, but Glow-throated Hummingbird [another Panama endemic listed as Vulnerable by IUCN ] made us work. For most of the morning we had only female or immature Selasphorus , and one male that only I saw briefly, almost certainly a Scintillant. A male Glow-throated finally appeared just before we were to depart, much to our relief. We carefully studied the tail patterns and underparts of a number of females, and Björn captured some outstanding photos. When he's sorted through we plan to create a webpage, as a Google search of the Glow-throated Hummingbird offers little regarding females of the species, and even Ridgely and HBW offer somewhat confusing information and illustrat
Leer más...

Speckled Antshrike in Cerro Azul, a report by Charles Vachon 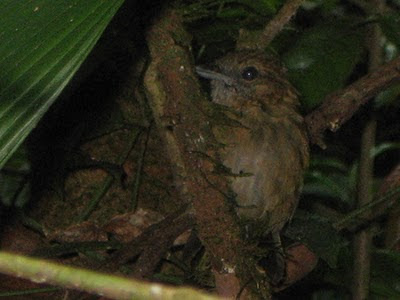 For two days in Cerro Azul, we hired Ismael Hernando "Nando" Quiroz as a guide, who is the Birder's View lodge caretaker. On march 29th, in the trail system below Birders' View, Nando discovered a female Speckled Antshrike . We observed the bird without too much difficulty for around 10 minutes. I was able to take some (pretty bad) photos of it using a point-and-shoot digital camera, and maybe more importantly I was also able to record both it's song and calls using a digital voice recorded. Nando was delighted that these proofs of the presence of the Xenornis were obtained. He told us that he had a male Speckled Anthshrike in the same place 2 years ago, but without anything to substantiate his record, and that this would be maybe the first documented record for the Birders' View surroundings.
Leer más...

- lunes, abril 19, 2010
Yesterday afternoon's Audubon Panama fieldtrip to Costa del Este had, as expected at this date, most of the common migratory shorebirds and gulls, some already in alternate plumage. Highlights included over 50 Black Skimmers , most of which showed the gray underwings and all-black tails of the South American subspecies cinerascens , a handful of Franklin's Gulls still in basic plumage, an alternate-plumage Ring-billed Gull , a few young Herring Gulls , a first-year Lesser Black-backed Gull and what we originally called a third-year Lesser Black-backed but are now calling a Kelp Gull . The gull in question was pretty big, with a large yellow bill that had a large black tip. The head was mostly white with dusky specks all over, merging into a dark smudge around and behind the eyes. The back was dark slaty gray with some older brown feathers in the coverts. Legs were putty-colored. No white tips on the primaries, black band across the tail. There is a size difference between Kel
Leer más...

- jueves, abril 15, 2010
Just to back up Benicio's report , Alred Raab, Mark and Joanie Hubsinger and I were at Bayano the day before (12/4), and found a female-plumaged Cinereous Becard at the Río Mono, which also responded to playback. Another interesting sighting was a female-plumaged Yellow-rumped Warbler , and late in the day on our return trip we also found a pair of Streaked Xenops , identified by voice as well as plumage. They appeared a bit distinctly-streaked for the race incomptus I would expect at Bayano- I wonder if any judgement as to subspecies was reached on the bird digiscoped by Kilo Campos at this same locale.
Leer más... 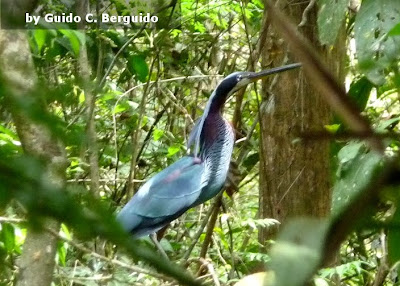 During a recent Advantage Tours birding trip in Central and Eastern Panama along with Bruce Cohen and Dale Dillavou, we had some interesting observations. On April 7th, while birding at the San Francisco Reserve near Tortí, we managed to record a few noteworthy hummingbirds like the Band-tailed Barbthroat, Blue-throated Goldentai l , Scaly-breasted Hummingbird, and Long-billed Starthroat. Walking along the forest edge we found Red-rumped Woodpecker, Spot-breasted Woodpecker , Sulphur-rumped Tanager and a flock of Dusky-faced Tanagers by the steam. Also a year-bird for me: a Red-billed Scythebill . Additionally, we noticed a pair of Orange-crowned Orioles nesting under a Banana leaf. Other interesting sightings were Black Antshrike , Bare-crowned Antbirds, Sooty-headed Tyrannulet , and no fewer than 5 different individuals of Royal Flycatcher, including a displaying female. Five species of puffbird were recorded: Pied, Black-breasted, White-whiskered, and Barred, as well as White-f
Leer más... 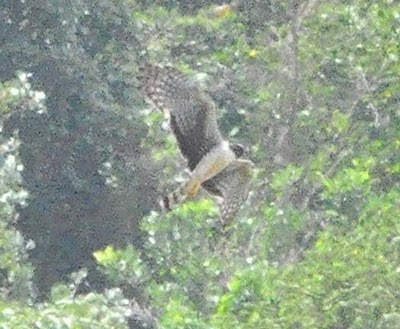 As promised, Alfred Raab sent in photos of the Long-winged Harrier seen by him, Mark and Joanie Hubinger an Ken Allaire on April 11, 2010 . From the photos it looks like a normal-morph adult, perhaps a male (although the underparts in the last photo look pretty buffy).
Leer más...

Another Long-winged Harrier in Tocumen, a report by Ken Allaire

- miércoles, abril 14, 2010
Alfred Raab, Marc and Joanie Hubsinger and I found a Long-winged Harrier on Sunday at about 1:00, completely by coincidence as we had not read Kilo's post. Alfred and Marc both obtained excellent photo documentation, which will be posted at their earliest opportunity. But our bird was definitely a light-morph male, not a dark-morph as Kilo described— our photos prove this conclusively. We also got close to a couple of rice fields and I had an all-too-brief look at a Spotted Rail in a small patch of irrigated rice.
Leer más...

Golden-green Woodpeckers in Bayano, a report by Venicio Wilson 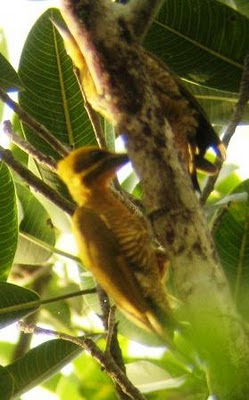 Today, while birding in Bayano Forest, in company of Karalee Patel, Ebrahim Patel and Ariel Tenorio, we found a pair of Golden-green Woodpeckers . I believe is the same pair I found about 5 years ago since there where only 100 meters from the old spot. Both of them where foraging high in the canopy of a Ficus tree next to the first creek. We took these pictures with a Kowa TSN-771 and a little point and shoot Canon camera. Birding was great but the sound of bulldozers and other heavy equipment in the area was not a good sign for the survival of this forest. In the way back to “Bayano Adventure” we stoped at the Río Mono bridge to find a very unusual becard. We belive was a Cinereous Becard since it looked very much like a Rose-throated Becard which I am more familiar with [ later identified as One-colored Becard ]. It had a slaty gray top with pale buff underparts, rufous tail, light brown back with some darker fethers in the nape and neck, like an immature male molting to adult pl
Leer más...

- domingo, abril 11, 2010
Euclides Campos and Alex Guevara tried to visit the now off-limits Tocumen Marsh this morning; access was denied, as is often the case of late. Still, they stopped at a lookout over the rice fields and, using a spotting scope, identified a distant all-black harrier with gray primaries as a dark morph adult male Long-winged Harrier . Alas, the rice fields were too far off to try to spot any rails.
Leer más...

- viernes, abril 09, 2010
Yesterday morning I visited Tocumen ricefields. Saw thousands of Dickcissels in huge flocks plus 1 Spotted Rail (+1 heard), and 2 Paint-billed Crakes . At least that is what I guess they were due to bright red shields. Unfortunately I did not see the underside of the tail. The crown was definitely gray, not brownish.
Leer más... 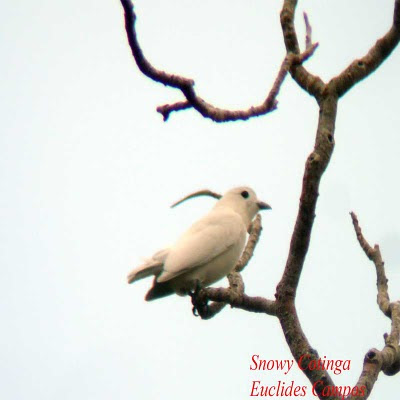 On Friday, March 26th, on our way to Bocas del Toro, we made a one-day birding stop at Cerro Redondo, a community located near the entrance of La Mesa in Veraguas, and saw the Rufous Nightjar which is common in the area. We arrived at Changuinola the following day. On Sunday the 28th we headed to Bongik, located close to Wekso. That afternoon we spotted a Snowy Cotinga and plenty of White-collared Manakins . Next day, we started hiking up the Bongik River and saw a Barred Hawk , three Snowy Cotingas and a Solitary Eagle . This was seen very well against a dark background close to the Rancho Quemado community. It had a very short tail with one tail band and, of course, its slaty gray color. We had a clear sky that day. Further at Rancho Quemado we reached a spectacular forest that yielded Rufous-winged Tanager , Black-headed Nightingale-Thrush , Buff-throated Foliage-gleaner ( hypophaeus subspecies), a pair of Cerulean Warblers , and a heard Thicket Antpitta . On Monday
Leer más...
Más entradas