A Massive Flock of Skimmers.

Rosabel Miró photographed this flock of 250 Black Skimmers , the biggest any of those present could remember encountering in Panama, at the Aguadulce Salinas.
Leer más... 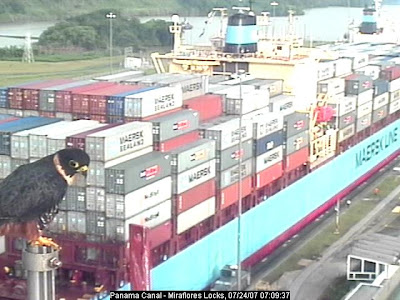 On the morning of July 24, one of the resident Bat Falcons graced the Miraflores Locks Live WebCam with a lenghty visit. Click this link to see if it's back.
Leer más...

- domingo, agosto 19, 2007
After 10 years at the other place, Xenornis moves to blogger. Access had been getting iffier and iffier over the last month or so, plus (let's admit it) geocities is SO 1990s. For older reports, visit Xenornis 1.0 by clicking here.
Leer más...

The Nesting Eagles of the Darién. A report by Guido Berguido. I returned from a scouting trip to the Metetí, Darién area on Saturday, August 11. We visited a Crested Eagle nest with a juvenile and a dark-phase adult. I had never seen a dark-phase before: the head was almost black and the underparts were all barred. These photos were taken with my little Nikon point-and-shoot. The adult was high up a Cuipo tree near the nest, but the juvenile was lower down. We also visited a spot near La Palma and were lucky to see a few Blue-and-gold Macaws and a pair of Great Greens. We also visited a Harpy Eagle nest. We explored some nearby ponds hoping for Black-chested Hawk and maybe some interesting ducks, but didn't get lucky: all we got were two hours wading in waist-deep swampy vegetation. The locals we talked to did say they had seen these "ruddy" hawks flying around, though. The spot looks promising, and we're considering organizing an extraordinary fieldtrip for PAS.
Leer más...

Yellow-billed Cotinga at Pedregal, Chiriquí. A report by Guido Berguido.

- miércoles, agosto 01, 2007
Last July 26 I went on a boat trip out of the Port of Pedregal near David, Chiriqui to check-out the mangroves in search of the Yellow-billed Cotinga. We saw Mangrove Black-hawk, kingfishers, and other usual suspects. Worth noting were a troop of about 20 Squirrel Monkeys nearby the port of Pedregal. We stoped by the house of a gentleman in one of the "islands" formed by the meandering river on the eastern side of the eastuary near the mouth of the river. We were surprised to see Keel-billed toucans, Chachalacas, Crimson-backed tanager, Lance-tailed Manakin.. we inquired the fellow living there for the Cotinga, and he replied that yes, they have seen "puerqueras" (the local name for Tityras, because of their calls). He went on to say that yes, there was one kind with a red face and one with a yellow "face". Those were of course encouraging news. He also said that there is a "zigua" tree in front of his house where both these birds come to feed. U
Leer más...
Más entradas