- jueves, agosto 21, 2008
During my last trip to Darién on August 4th to 7th, specifically at El Real, I saw the Large-billed Seed-Finch and the Yellow-hooded Blackbird around the airstrip. Both were singing. On the way to the airstrip there are a few patches of heliconia where I saw a female Ruby Topaz for three days in a row. The best fieldmark was its tail, bronzy in the middle tail feathers and rufous on the outer tail feathers with a dark subterminal band and white tips. It was kind of grayish underneath and bronzy on top. I noticed during the third day of observation that she raised her crown feathers and spread her tail and was perched around 3 m above ground. I heard several Gray-breasted Crakes with their peculiar call of 4 notes, te-te-te-te, along the airstrip. Other interesting birds I saw every single day were Spectacled Parrotlet, Agami Heron, immature, Rufous-tailed Jacamar, Gray Elaenia, Black Oropendola, Yellow-backed Tanager, Red-billed Scythebill, and a Golden-green Woodpecker was hear
Leer más... 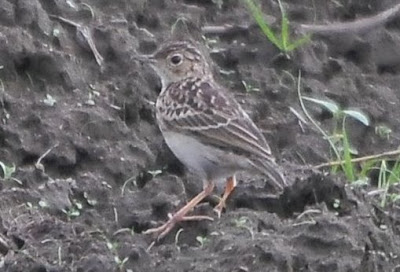 Olmedo Miró photographed this Yellowish Pipit at his rice farm near Playa Barqueta in Alanje, Chiriquí on July 30.
Leer más... Jacobo Ortega photographed a pair of Wedge-tailed Grass-Finches in Altos de Campana National Park. The birds were seen this morning in the grassy area around the antennas.
Leer más...
Más entradas