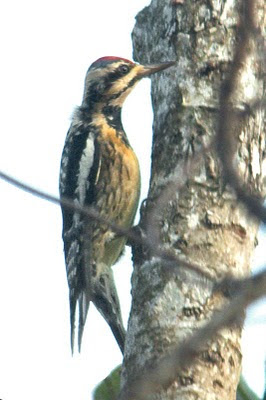 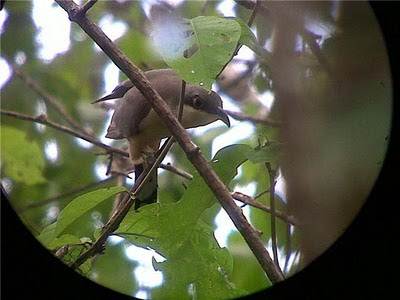 - lunes, enero 25, 2010
Friday, January 22, 2010 - Altos del Maria At mid day (12:00 am) Alfred Raab, my friends Fritz Furrer and Rene Appenzeller were watching for hawks from the most westerly tower above Rioca in Altos del Maria. We then hear a hawk calling like a 'kie kie kie kie kie'. We found the Hawk at or little below eye level circling about 200 to 300m from us in clear view. We noticed its large size with medium to light gray on the upper wings and back. Tail: A very wide, pure white tail band followed with black was very clearly visible, also the white scaling on the tail covers was visible. Bill was yellow, easily noticeable. We watched the bird for about one minute, he then dove straight down into the woods below us. We identified this Hawk as a Solitary Eagle . About 10 minutes later the same hawk was circling again about 300m in front of us at eye level. We clearly saw the gray back and tail pattern again. As it circled higher we saw the undersides which was dark. It then flew away from
Leer más... 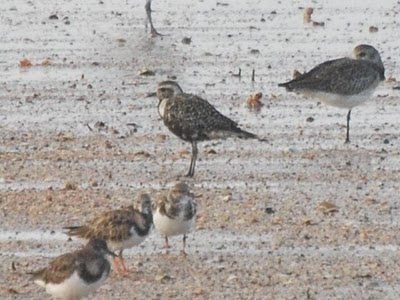 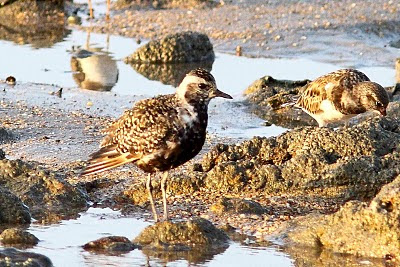 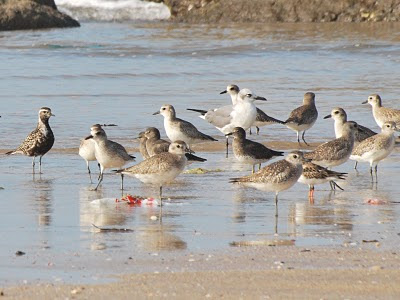 Jan Axel Cubilla posted an account of our golden-plover sighting of last Saturday on his blog . Included are a lot of photos of the bird, both digiscoped and DSLRd, and an analyzed close-up of the rectrice-primary situation, reprinted below for documentation purposes. The most important field mark was the primary projection. I can see the tip of the longest tertial barely reaching the tail tip, and 3 primary tips projecting from it (maybe 4, confusing because American Golden-Plover is supposed to have at least 4 projecting primary tips, although quite often primaries 9 and 10 are the same size). Also note the tail tip far behind the wing tips (unfortunately, I did not obtain better photos. Both photos were cropped; the edited one was brightened and sharpened). But CAUTION, all these differences can be influenced by molt. Note that this particular bird was molting the tertials and the rectrices, which might affect the perception of the relative relations between the wings and the tail
Leer más...

Details on the Hudsonian Godwit & Las Perlas, by Venicio Wilson 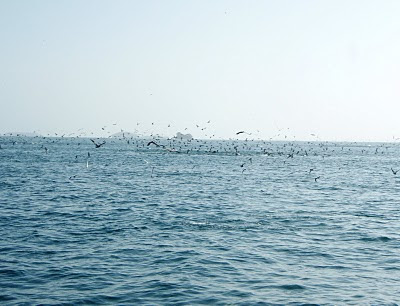 On Friday 8th of January Michaela Schmidt, Christian Gernez and myself (Venicio Wilson) found a Hudsonian Godwit at Playa Veracruz. The bird was the only shorebird in the beach. It was standing alone in the shallow water directly in front of the restaurants at the beginning of the beach. My first guess when I saw it with my binoculars was of a “larger” Willet. I had my scope with me and when I saw it with the scope I noticed two things: the mask in the face of the bird and the pinkish-bone color of the base of the bill. I knew I had something different but the humidity and the heat of the beach convinced us three of not staying too long. The bird was standing still in the shallow water. It seemed a bit nervous or alert. I described the bird to myself as been larger than a Willet, bluish-gray, white underneath, upturn bill with pink-bone color at base, contrasting mask. As we drove back to Panama City, I reached my copy of the Sibley Guide to Birds and checked the shorebirds when I n
Leer más... 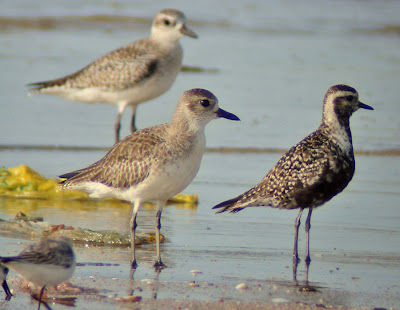 As promised yesterday, a group of fearless birders (Rosabel Miró, Gloriela Archbold, Jan Axel Cubilla, Venicio Wilson and Darién Montañez) headed to Veracruz this morning to hunt for the Hudsonian Godwit seen yesterday. At press time the godwit had not been relocated, but the morning did produce an American Golden-Plover in a small flock of Black-bellied Plovers. Unlike every other bird in the group, this plover had a lot of black in the chest, and we're calling it an adult molting to alternate plumage (or from it; more on that later. We have digiscoped photos coming in from Rosabel and Jan Axel, plus real photos from Jan Axel, that may allow us to better age it). Besides the striking difference in plumage, this plover was noticeably smaller, and had a shorter, thinner bill that looked more conical than the more cylindrical Black-bellied Plover bills. Its head also looked smaller and rounder, with the forehead meeting the bill almost vertically. Its stance was more vertical, too,
Leer más...

- viernes, enero 08, 2010
Venicio Wilson and Christian Gernez found a Hudsonian Godwit at Veracruz Beach this morning. A hardy team of local birders will head there tomorrow morning to try and find it. More details as they develop. Update: Says Venicio that the godwit was an adult in winter plumage and that it was easy to find, as it was the only bird on the beach.
Leer más...
Más entradas