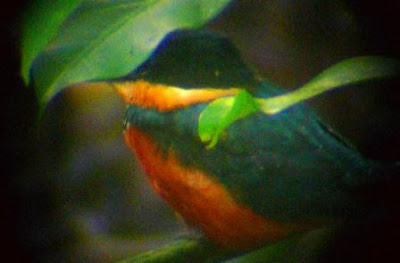 These are the highlights of a 10-day Birding Trip. I led from March 5th to March 16th March 6th —Early afternoon 1.5 km walk north from Quebrada Juan Grande at Pipeline road. We spotted Spot-Crowned Antvireo (Male & female), Brownish Twistwing, Thrushlike Schiffornis and a Green-and-Rufous Kingfisher hidden in the foliage at a small pond. March 10th —We had a Green-crowned Woodnymph and Ornate Hawk-Eagle on flight at Narganá Forest Reserve. March 11th— Slate-throated Gnatcatcher and Sulphur-rumped Tanager on a mixed flock at Narganá Forest Reserve, a Bare-throated Tiger-Heron seen hidden in the grass at the Bayano River Bridge. March 12th— Pheasant Cuckoo and a Bat Falcon couple seen at the Escobal Road, 2 km before the Achiote Road turn off. Also a White-headed Wren and a Rufous-crested Coquette at a side trail 300 m from the first bridge at Achiote Road; Later that same da
Leer más...

PAS Fieldtrip to Islas Frailes. NOT a new species for Panama 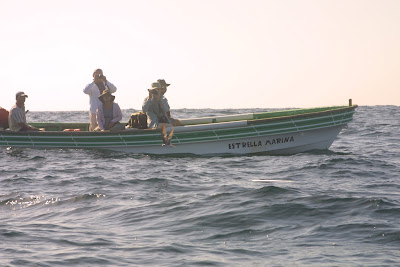 The Panama Audubon fieldtrip to Islas Frailes of Saturday, March 14 2009 was slow, as usual, but productive, also as usual. We spent about 6 hours on two boats, most of the time about 15 miles offshore. Most notable were the absent species: not a single Brown Noddy was around, and we usually see many hundreds of these. Also, both Frailes and Monjas were almost completely devoid of birds, a first in the 8–10 times I’ve been there. No Sooty or Bridled Terns were seen in either island; a couple boobies was all there was. We also didn’t see any Storm-Petrels, but we’re blaming this on bad chumming on our part. The bird of the day was a mystery bicolored shearwater, larger than Galapagos Shearwater, of which we saw a pair rather close to the boats and then a more distant single bird. Originally called out as Wedge-tailed Shearwaters, a species neither myself nor Jan Axel Cubilla on the other boat has had experience with, but which at least seem to be in season in Costa Rica. Back to land
Leer más...

Pied Water-Tyrant at mouth of Río Pacora, a report by Matt Miller

- miércoles, marzo 18, 2009
Oscar López, Alonso Santos and myself saw several Fluvicola pica inside the borders of the mangroves near the mouth of the Pacora this morning. They were feeding along side Charadrius minutilla (also inside the mangrove forest?!?) at swarming flies over the mud. Tide was at its absolute high. Other migrants included several species of Tringa, Himantopus, Charadrius semipalmatus, but in general, migrant numbers seemed low. I should note that this is not a very nice site to bird, as the habitat is quite unattractive and scores of men work all day as paleros shoveling sand for the cement companies. We've had stuff stolen from our truck on earlier trips. I should probably mention that there was a lone Tachybaptus dominicus and several Tyrannus dominicensis a bit in towards Felipillo at this site back in mid-February, along with a lone Herpetotheres cachinnans.
Leer más...
Más entradas