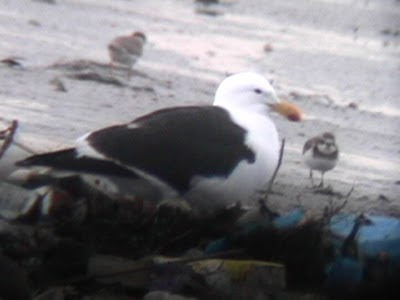 Rosabel and Karl Kaufmann and Delicia and Darién Montañez went to Costa del Este to look for the Kelp Gulls. After finding Guido Berguido and Venicio Wilson (but no gulls) at the spot where they had been seen on Sunday, we went to the coastal Boulevard on Costa del Este proper, and after walking the mud beyond the boluevard for a few hundred meters succeeded in locting the five gulls, this time surrounded by peeps and plovers (so they looked even bigger). The pictures taken with a video camera through a spotting scope turned out to be slightly better than expected, and are hereby displayed for your examination. Later on, Guido and Venicio walked all the way to the mouth of the river, and got great views of the gulls there.
Leer más...

- lunes, noviembre 26, 2001
Early this morning, a juvenile Yellow-bellied Sapsucker was seen by Steve Huggins, Darién Montañez and Ken Wysocki, perched on a pine tree on the left side of the first stretch of Calle Maipo, Cerro Azul. The facial pattern, though somewhat dull, was quite noticeable, especially since its forecrown was mottled with red. Later on, Black-eared Wood-Quail were heard calling near the end of the trail.
Leer más...

- domingo, noviembre 25, 2001
Darién Montañez, Ken Wysocki and Steve Huggins saw five Kelp Gulls, four adults and a younger (three-year?) individual, at the water’s edge in Costa del Este. We were standing on the vacant lot right next to the Corredor Sur, by the Costa del Este exit (if you’re coming from the city), and they were standing next to a few Laughing Gulls, about 25 meters away from us. These gulls were huge, and their bold black-and-white plumage made them all the more conspicuous. Our first guess was Great Black-backed Gull, but the legs of our birds were dull grayish-green, not pink. Also, they did not have bold white mirrors on the primaries like Great Black-backeds would. Their bills were big and heavy, bright yellow with a red gonys-spot. The heads were snow-white with no visible streaking, as was the neck, rump, tail and underparts of the bird. Their backs and upperwings were dark slaty-gray, darker on the primaries, with broad white trailing edges. The underwings were white, dark gray on the prima
Leer más...

- sábado, noviembre 24, 2001
Ken Wysocki and Steve Huggins, visiting birders from Chicago, and Darién Montañez discovered an adult European Starling in winter plumage at Fort Sherman, Colón. The bird was first seen at 2:30 P.M. on the grass just beyond the Shimmy Beach fence behind the last of the row of houses. The bird was walking near (but not with) a few Great-tailed Grackles, and was observed both on the ground and in flight for about 20 minutes. Apart from its white spots, the smaller size, shorter tail and more vertical stance gave it a completely different jizz from that of any other Panamanian bird, making it almost impossible to misidentify, and it should be easy to pick out from even the biggest blackbird flock. This is only the second report of Starling in Panama, the previous one being of another single adult seen twice at Albrook in February of 1979. This bird did not seem to be particularly tame (it flew off when approached) or starved (it did not rush to feed on the Pringles offered by the observer
Leer más...

Another Hawk-Eagle at Cerro Azul

- lunes, noviembre 12, 2001
Loyda Sánchez went with the Kaufmanns to their Cerro Azul villa. At around noon they saw an adult Ornate Hawk-Eagle soaring at eye level over the valley beyond their back yard. It then soared up and flew off towards Cerro Jefe. The black, slicked-back crest and the rufous sides of the face were pretty evident, as was the black-and-white barring on the underwings and belly. Another addition to their yard list was a Tawny-crowned Greenlet heard and then seen by Rosabel near the caretaker's quarters.
Leer más...
Más entradas