- sábado, enero 12, 2008
Will Carter sent in the following report: My wife, Gill and I encountered this Rufous-vented Ground-Cuckoo at 8:15 on the morning of Jan 06 approx. 1 km in from the front gate on Pipieline Road. Probably the same individual that Panamanian guide Guido Berguido saw the day before. The antswarm paralleled the road for about 30 minutes and then began to cross. We then were treated to unobstructed views of this beautiful bird for nearly 3 hours. During a lull in activity, the bird roosted on a log and was motionless for 10 minutes or so. Traffic was kind enough to pause at our request and at times there were 15 spectators watching the swarm activity. Later, inside the forest, we watched the swarm and a Rufous Motmot was competing with the Ground-Cuckoo for insects—3 times the two birds collided as they dashed for insects—the Ground-Cuckoo seemed to come away with the food each time.
Leer más...

- viernes, enero 11, 2008
The Canopy Tower's Carlos Bethancourt reports a male Hooded Warbler seen today, somewhere in Metropolitan Nature Park. This seems to be a good season for hoodeds, with males seen both on the Central christmas count (beyond the telephone tower enclosure atop "Renacer" hill) and on the Atlantic count (at the former Fort Davis.) He also reports seeing a single Long-billed Dowitcher yesterday morning, in with a flock of Short-billeds on the road out to the beach at Tocumen Marsh. The Long-billed was identified mainly based on its call. Also seen there was Stilt Sandpiper.
Leer más... 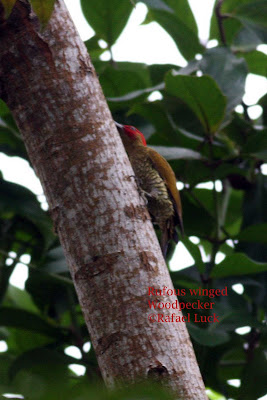 - miércoles, enero 09, 2008
Guido Berguido sent in the following reports: Rufous-vented Ground-Cuckoo: On Saturday Jan 5th, 2008, while doing a nature walk with four Canadian folks along the Pipeline Road we hit a nice Eciton Army Ant Swarm. On it were all the usual suspects: Plain-brown and Northern Barred Woodcreeper, Bicolored, Spotted, and a few Ocellated Antbirds. Also along were a couple of Grey-headed Tanagers, and an opportunistic Black-breasted Puffbird; but the highlight at the swarm was an elusive Rufous-vented Ground-Cuckoo. The bird was first seen by Wiljem Zitman who was with us. He just said that a large "chicken" had ran along the back of the swarm. At first I thought it was just a Great Tinamou, but then he told me it had a long tail! This was only the third time I've seen this bird so it was exciting. Brown-throated Parakeet: On Monday Jan 7th while visiting relatives in the neighborhood of Parque Lefevre I heard a bunch of parakeets feeding on a blooming Erythrina tree. A
Leer más...

- domingo, enero 06, 2008
Rosabel and Karl Kaufmann, Delicia and Darién Montañez and Dave Klauber spent an hour or so in the morning (and an hour or so in the afternoon) scanning all likely flycatcher perches on Las Nubes looking unsuccessfully for the Crowned Slaty Flycatcher that was seen in the area a month ago. What we did find was an adult (White-lored) Yellow-throated Warbler and a small flock of (Myrtle) Yellow-rumped Warblers in with a large flock of Tennessee Warblers, darting all over the pines along the downhill section of Calle Principal about 100 yards uphill from the intersection with Calle A.
Leer más...

- martes, enero 01, 2008
Dave Klauber sent in the following report of Cave Swallows seen January 1 at Playa Corona. 2 birds seen perched on a TV antenna on a house on a hill just east of the river outlet, turning left from the path to the beach. The rump was seen on one bird, which appeared very pale, buff/white possibly. From the front the head appeared completely dark, definitely no buff forehead. The throat and upper breast were orange/buff, and the remaining underparts appeared white or off-white. Using the National Geographic guide as a reference, the throat color on the melanogaster race of Cliff Swallow would have been much darker. When the bird flew I did not notice any coloration on the flanks, as would the West Indian race of Cave Swallow, so my guess is it was probably the southwestern pelodoma race, but that conclusion is not definite. The tail was mostly square, with a slight notch in the center. The birds were observed about 7:30 AM January 1, 2008 for about 10 minutes, mostly perched. They were
Leer más...
Más entradas