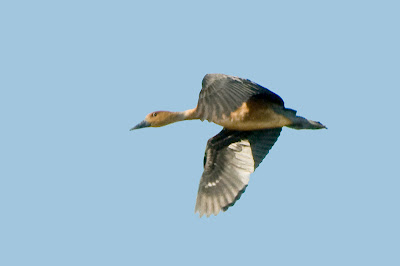 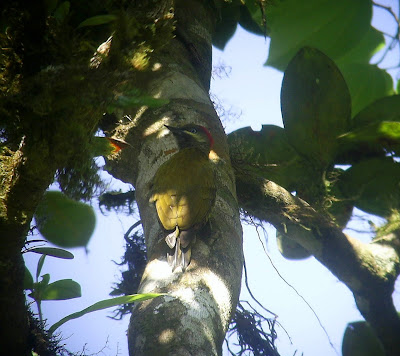 On Wednesday, February 6 at around 10 a.m. John Rowlett (Field Guides Inc.) and Faustino Sánchez (Canopy Lodge) had a Stripe-cheeked Woodpecker at Altos del María, while leading a birding group. This Panama endemic is more frequently reported from the foothills east of the canal, but the British Museum has a 1875 specimen from (possibly) the Caribbean slope of Veraguas. Also, the type specimen was actually collected near the Panama Railroad, on the Atlantic side. Whilst waiting for the full report, here is a photo of the bird in question, taken by Faustino Sánchez.
Leer más... 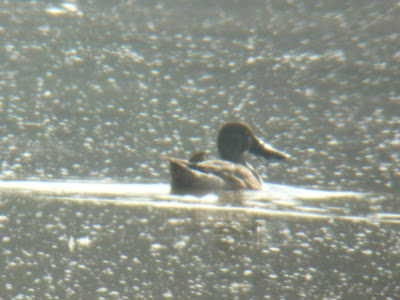 The Canopy Tower's Carlos Bethancourt sent in the following reports: I am just writing to report a couple of bird sighting that I had last week while leading a VENT tour with Kevin Zimmer. On Wednesday Feb 6 around 8:30 am we had a White-eyed Vireo that was very vocal. The bird was on the road to the spillway area in Gatún Locks; I was able to get a decent recording of it. In the same area we had about 6 females Indigo Bunting plus a pair of Dickcissel. On Friday Feb 8 in Tocumen marsh I had a nice Northern Shoveler. I was able to get a picture of this bird that was very far away as you can see a little bit of the white crescent that show on the side of the face. Also attached is a picture of that elusive bird, the Pheasant Cuckoo, that I saw on Plantation Trail this morning. They are getting into the season since they have been very vocal lately.
Leer más...

- domingo, febrero 10, 2008
Ariel Aguirre sent in some highlights from his recent excursions around the Canal Area: Jan. 15. Mangrove Cuckoo: a single individual seen on the mangroves in front of the STRI Marine Exhibit Center auditorium at Punta Culebra. Jan. 16. Blue-winged Warbler: seen on a mix flock on the lowest section of La Cienaguita Trail about 25 m past the Ranger Checkpoint at Metropolitan Nature Park. Feb. 2. Pheasant Cuckoo: seen at Rancho Ramos in the forest patch on the right side of the road just before the fork.
Leer más...

- domingo, febrero 10, 2008
Julie Craves and Darrin O'Brien sent in the third record of Warbling Vireo for Panama: Date and time: 12 January 2008, approximately 12:40 PM Location: Santa Clara, Chiriqui Panama: just below Ojo de Agua section of Finca Hartmann. Lat/long approximately 8.858, -82.7468. Circumstances of sighting: We were returning to the Hartmann residence after birding the finca’s upper Ojo de Agua section. We were just downhill from forested patches and there were bananas/plantains growing on the left side of the road. O’Brien stopped to point out a vireo foraging in a Musa by the side of the road, about 15 to 20 feet away from us. The Musa was only about 10 feet tall, so the bird was foraging at or near eye level, in good light. We immediately identified it as a Warbling Vireo, a common species where we live in southern Michigan, USA. We stopped to examine the bird as it was the first Warbling Vireo we’d had on the trip, and because we did not recall this species being shown in our plates
Leer más...
Más entradas