Pelagic trip off Pedasí (including a species new for Panama), a report by Jan Axel Cubilla

- miércoles, octubre 29, 2014
Report by Jan Axel Cubilla
Photographs by Rafael Luck
Date: October 25th, 2014.
Participants: George Angehr, Rafael Luck, Euclides Campos and Jan Axel Cubilla (plus captain Jeff Hopkins and crew member “Lito”)
We departed at 6:30 am from El Arenal beach, close to the town of Pedasi aboard a 30 ft sport fishing boat and headed directly to the south. Our intention was to chum a mixture of fish oil (kindly donated by Fulo Motta and Laly Vallarino) and bait plus popcorn at two different seamounts (at N 7º 14’ 52.0’’, W -80º 1’ 0.2’’ and 7º 18’ 31.7’’, W -79º 39’ 43.1’’, this last one surrounded by 1000-meter depths). We planned a 8-hours long trip, spending at least one hour at each seamount. The top speed of the boat was 12 nm, and we reached the farthest point from land at 27 nm approximately.
In total, we recorded 19 species (plus three taxa), including eight tubenoses (petrels, shearwaters and storm-petrels), five jaegers and terns, and three suliformes (frigatebirds and boobies). The remaining consisted of common migratory species (Chimney Swifts, Cliff and Barn Swallows). Of course, many individuals remained unidentified due to field conditions. 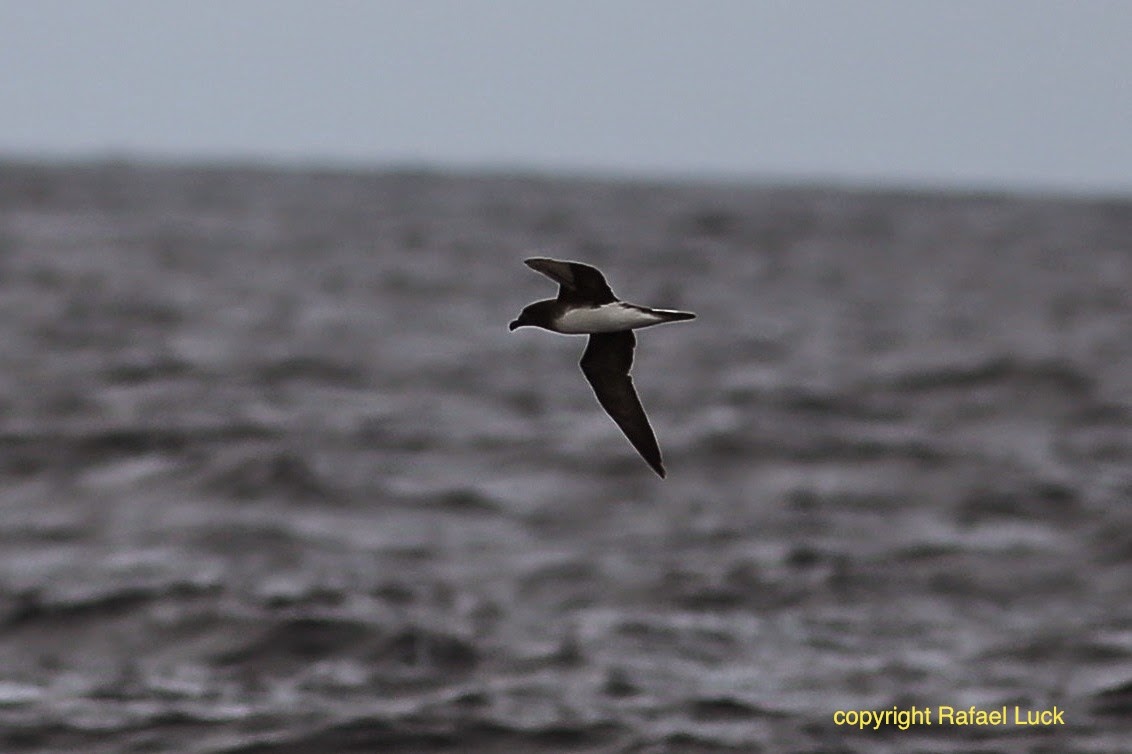 The highlights included three Tahiti Petrels at both seamounts. We managed photographs of these individuals, thus confirming its presence in Panamanian waters after the first reported sighting in september 2010. At the first seamount we also recorded three storm-petrel species (Wedge-rumped, Black and Least Storm-Petrels), and a Pomarine Jaeger that approached closely to the boat. 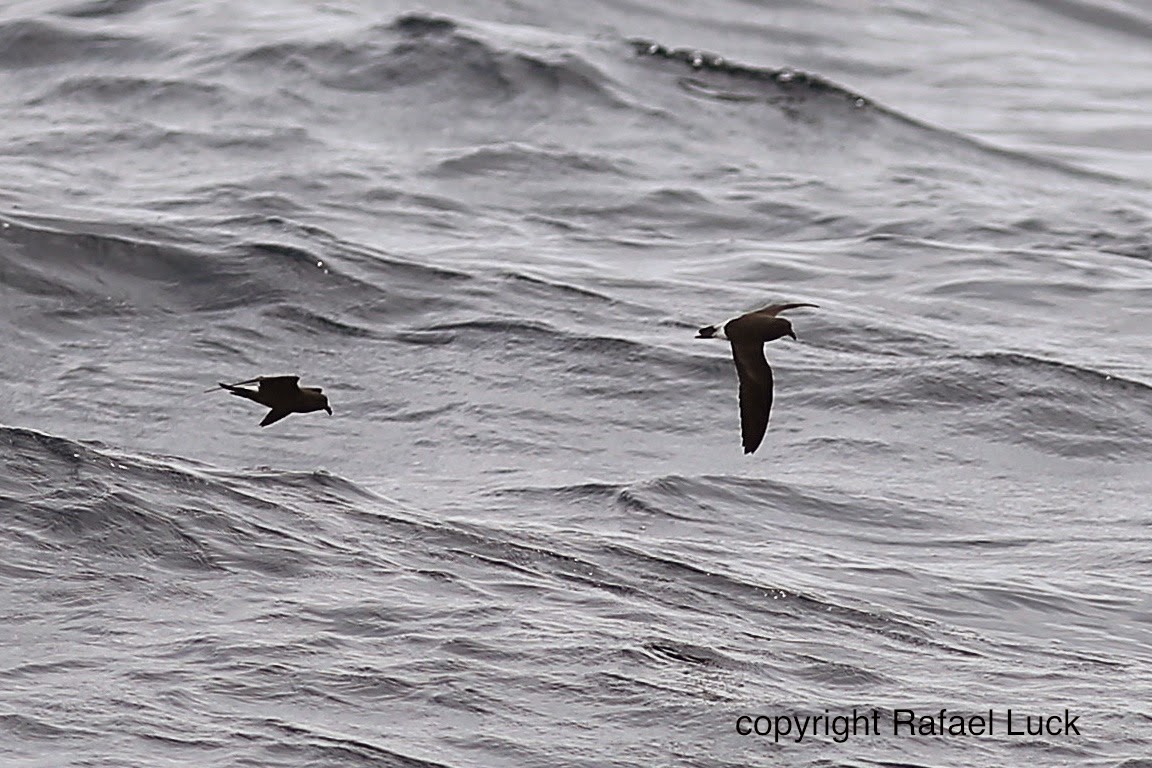 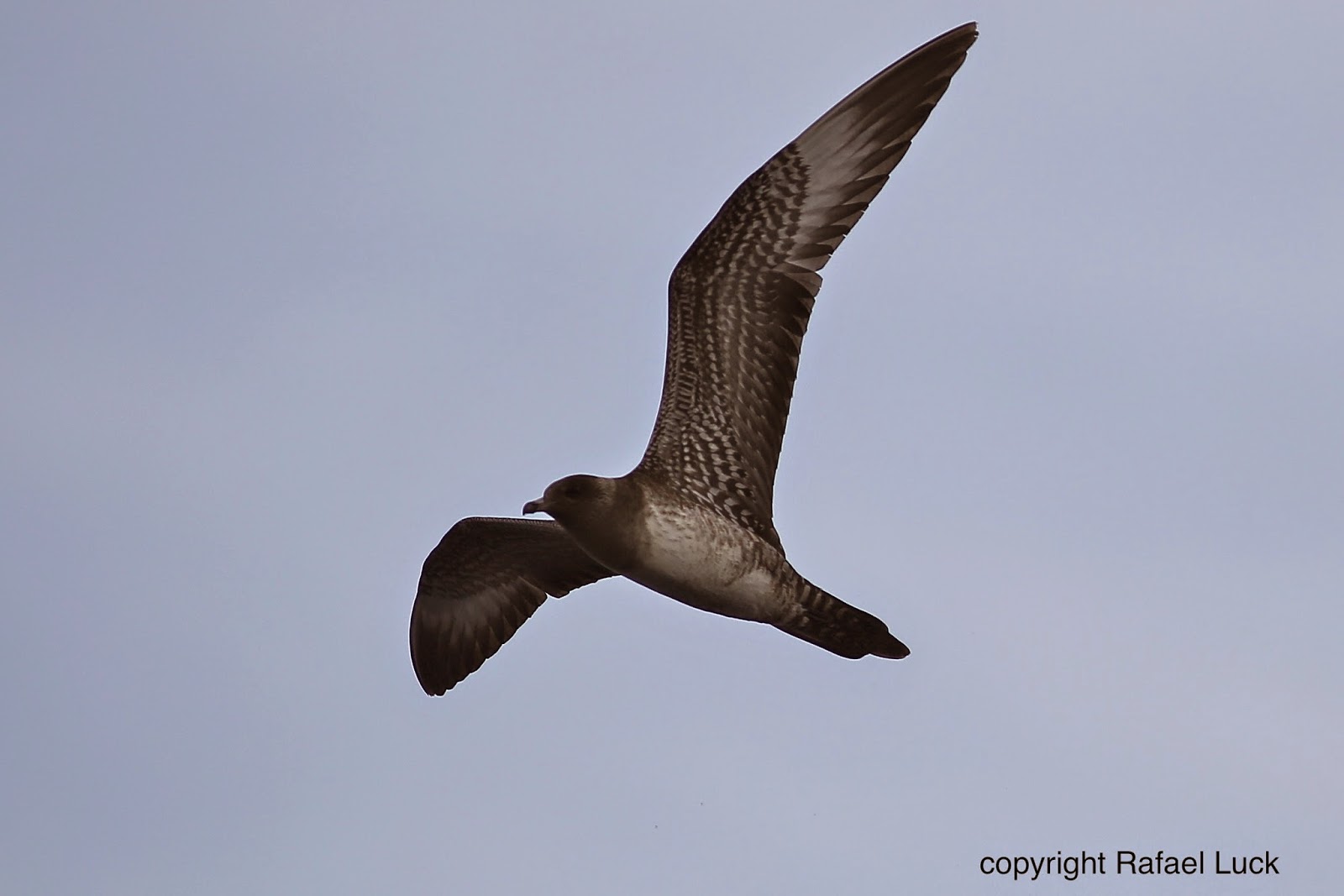 On route between both seamounts, we saw several Galapagos and Wedge-tailed Shearwaters, including one dark-phase individual of the latter, and flocks of Sooty Terns as well. 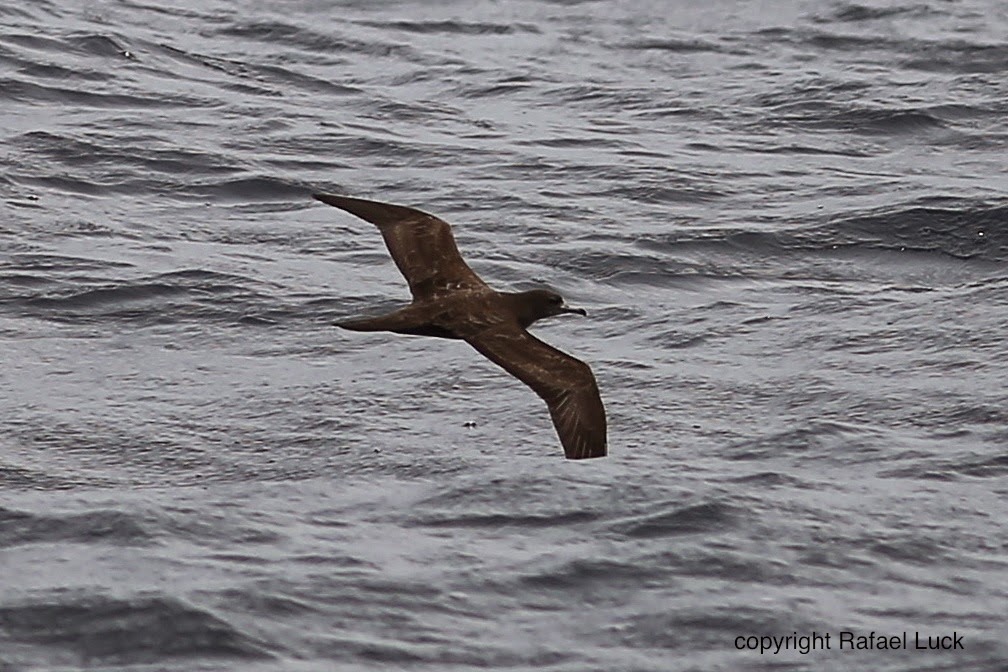 Apart of the Tahiti Petrel and Wedge-rumped Storm-Petrels at the second seamount, we also saw our first (of two) adult Nazca Booby. This bird ignored us completely as it flew far away from us, allowing only some record shots. 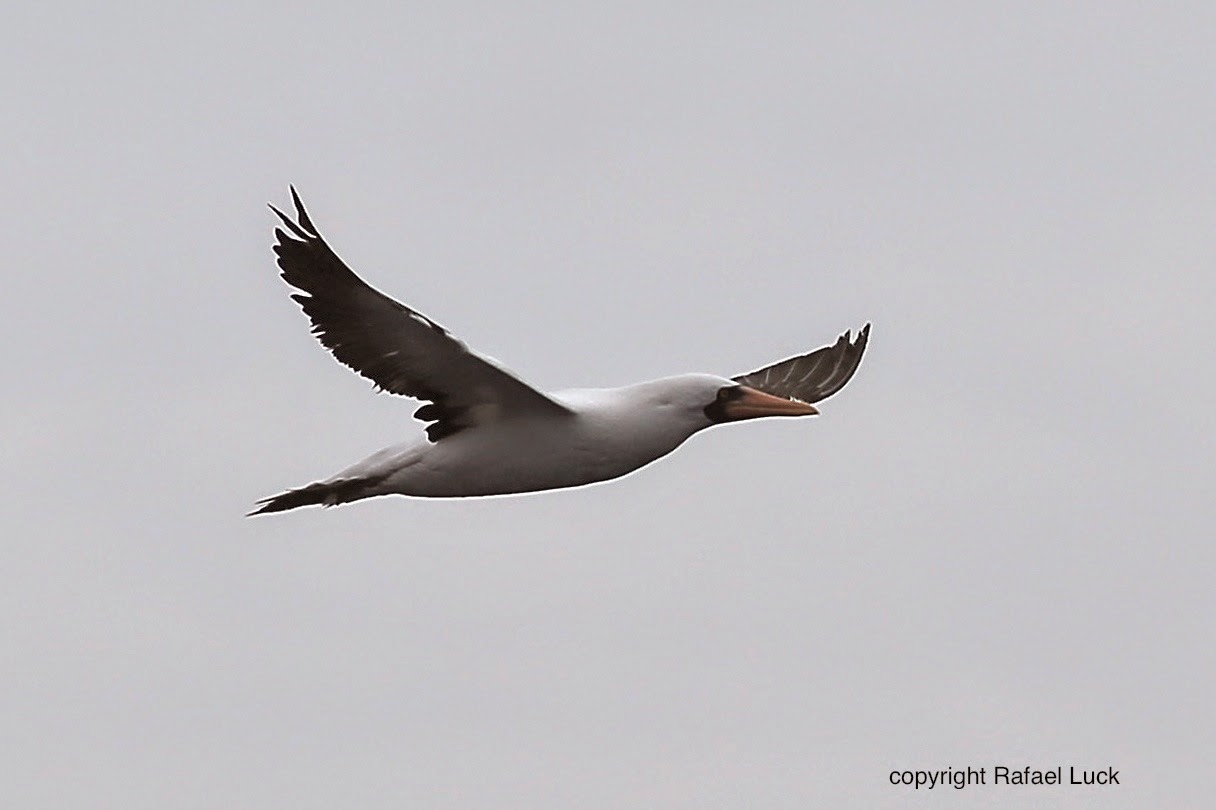 Around 12:30 pm, in the way back to port (N 7º 23’ 38.5’’, W -79º 37’ 56.7’’, we found a huge mixed flock in a feeding frenzy over a school of tuna (according to Lito). We saw many individuals of the two shearwaters species already recorded plus a definitve Sooty Shearwater (certainly more since we were not able to inspect the whole group due to lack of time). We also saw another Pomarine Jaeger and a Nazca Booby that flew over the boat twice, allowing great views this time. In the middle of the frenzy, three unidentified shearwaters flew close to the boat, allowing some shots. About the same size and pattern of the pale-phase Wedge-tailed Shearwaters recorded elsewhere, these birds looked stockier and not as long-tailed It was not until we reviewed the photos that we realized that these birds were in fact Pink-footed Shearwaters, a species never recorded in Panama before, although expected considering the several recent reports from nearby Costa Rica. 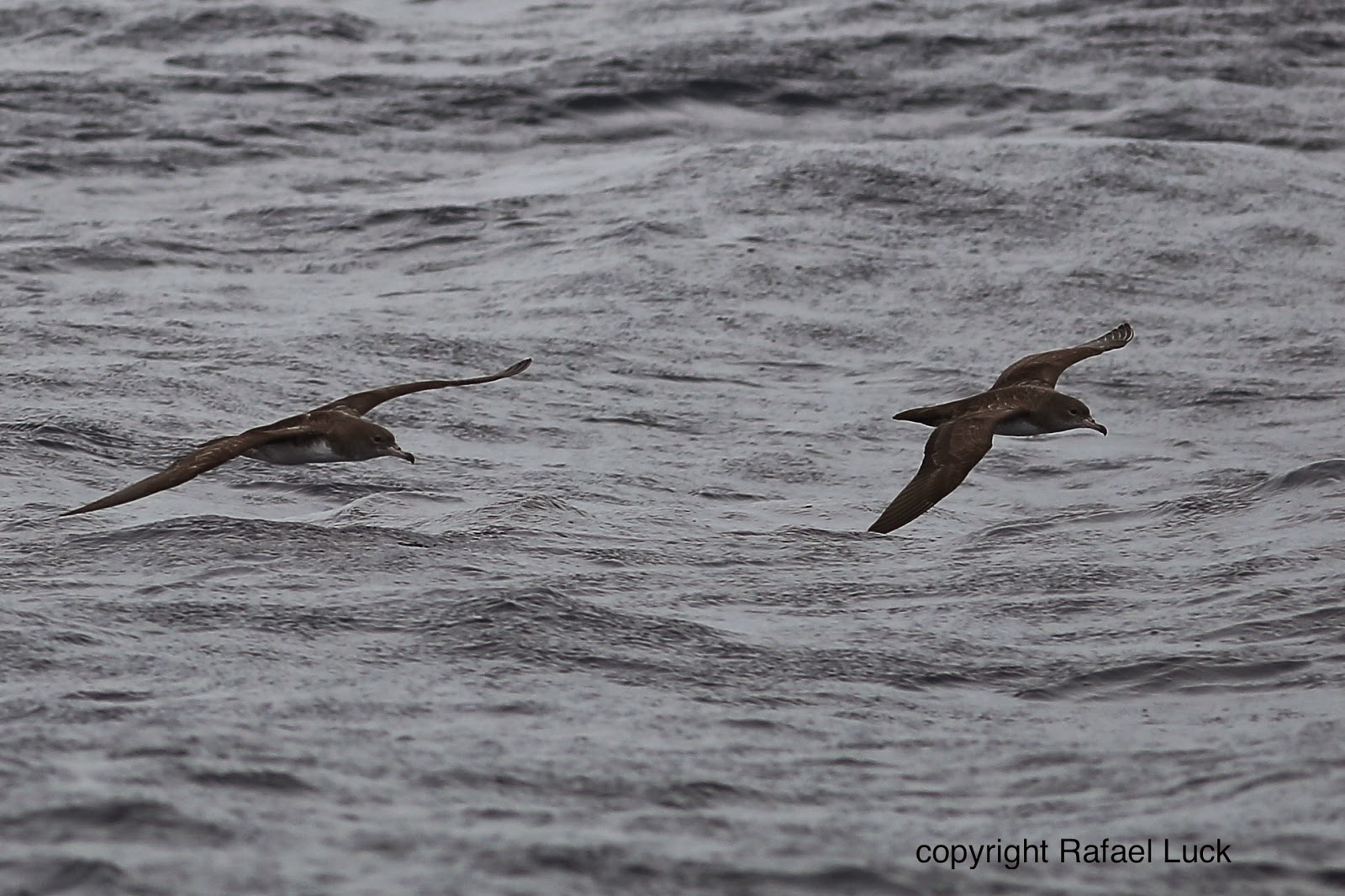 [Ed. note: We are flirting with the idea of heading out in november, perhaps on Saturday the 22nd. If you're interested in joining, let us know!]