- martes, junio 07, 2011
This past weekend I had a complete deep immersion into eastern Panama, that part of the country that remained pure and untouched on it's vast majority until the mid-60's. On Friday 24 and Saturday 25 I was invited by Raúl Arias de Para, along with Carlos Bethancourt and Ismael Hernando Quiróz (the famous Nando from Cerro Azul) to birdwatch the area between Metetí and Yaviza. [See Carlos' report here].
On Saturday afternoon, after saying goodbye to my original team, I joined the group of birders from Panama Audubon Society that the next day would observe birds in the forests around Rio Bayano. Claudia and Bill Ahrens, Cindy and Leslie Lieurance, Rosabel and Karl Kaufmann ventured to visit places that we have recently discovered in the area of ​​Tortí.
Early Sunday morning we visited the Playa Chuzo forest where, thanks to an excellent recording played by Bill Ahrens (recorded by Ken Allaire) we saw a couple of Double-banded Graytails up close, a lifer for all members present. Then we tried for a pair of Gray-checked Nunlets that live in the area and they appeared close enough to be photographed. A mixed flock approached and among those present were Red-rumped Woodpecker, Cinnamon Woodpecker, Golden-fronted Greenlet and a beautiful Reb-billed Scythebill that was seen by the Ahrens, Cindy and I. 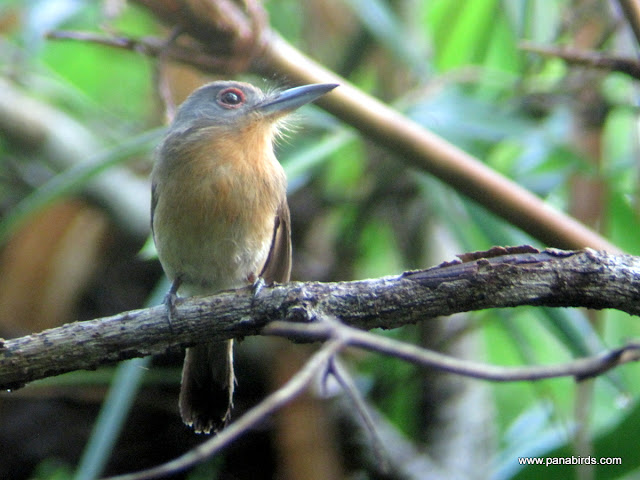 After such a nice start, we drove to hotel Portal Avicar to have a real breakfast so we could continue in our search for rare birds. We visited the gallery forests of Rio Tortí where we saw a very active male Cinereous Becard, a lifebird for 4 out of 6 team members. An intermediate race Bay Wren, Pacific Antwren, Black Antshrike, Buff-rumped Warbler and a very cooperative Scaly-breasted Hummingbird were the filling of the day. Before we left we saw an adult Great Black-Hawk bringing food to a hungry chick. Also notable was a Great Crested Flycatcher this late in the season. Some of us called it a Panama Flycatcher at first but later I mentioned that Panama had no rufous on its wings or tail.
After greeting the main group of PAS and lunch at Portal Avicar we went to Bayano where we joined again the main group of PAS and saw Bicolored Antbird, Rufous-winged Antwren, Streak-headed Woodcreaper and Black-tailed Trogon in the forest. The Ahrens and the Lieurances decided to leave for home while Rosabel, Karl and I joined the group for some more minutes. On the Bayano bridge we saw the special birds that usually are found in the site: Bare-throated Tiger-Heron, Pied Water-tyrant, Striated Heron, Cocoi Heron and a Neotropical River Otter traversing the lake from shore to shore.
After saying goodbye to PAS group we departed at 3:30 to Nusagandi humid foothills. We only saw 3 birds: a Short-billed Pigeon, a Keel-billed Toucan and a very rare Central American Pygmy-owl, one of the most difficult owls to see in Panama. 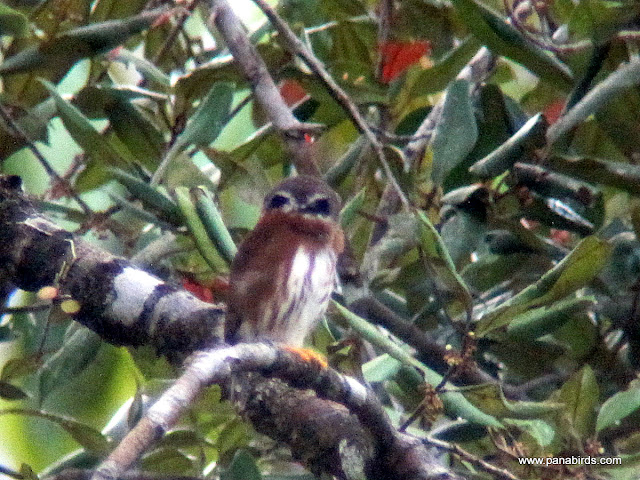 Rosabel Miro recorded the owls call that we used to attract it to a more visible spot. After 45 minutes of sonic flirting with this miniature winged carnivore I spotted the tiny bird much higher than I was expecting. Here I leave you the video that I made of the owl.
black antshrike central american pygmy-owl cinereous becard double-banded graytail gray-cheeked nunlet red-billed scythebill rufous-winged antwren