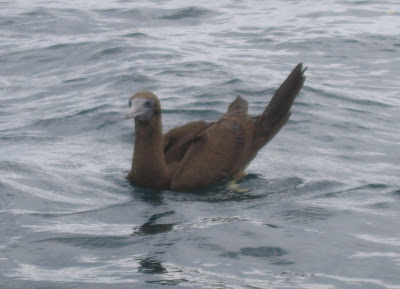 On Saturday, August 7, Claudia & Bill Ahrens, Rosabel & Karl Kaufmann, and Delicia & Darién Montañez braved the threatening skies over Pedasí and headed out for Islas Frailes. Frailes del Sur were covered in birds: about 500 Bridled Terns, including some in juvenile plumage, maybe 200 Brown Noddies, and 100 Sooty Terns, including some 25 in juvenile plumage that would often fly over our boat.
Further out, and after deploying the chum, we started running into procellariids: one or two Galápagos Shearwater, a single Sooty Shearwater and a dozen Wedge-rumped Storm-Petrels. Our persistence was rewarded when we approached a flock of noddies and ran into about 120 Galápagos Sheawaters sitting on the water, allowing for really close views. Of course, I completely forgot I had a camera on me. After this flock flew and floated away, we went out some more and found another similar flock, this time with about 80 Galápagos Shearwaters, similarly well-behaved. Our boatman estimated we were 20 km offshore.
That afternoon we headed for El Agallito Beach, where we had 25 Least Terns, a quick Common Ground-Dove and not much else.
Today on our way back to the city we hit Las Macanas Marsh, which had Fulvous Whistling-Duck and not much more, but the Aguadulce Salinas was full of birds. We had two flocks of resting Black Skimmers (amounting to 200 individuals), four distant Stilt Sandpipers, a White-winged Dove, and the bird of the day: a Reddish Egret. 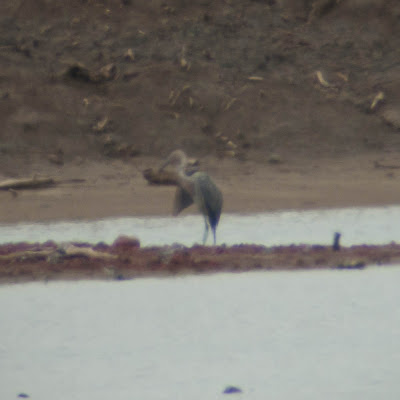 The bird, which looked like a 2nd year dark morph, had a reddish head and neck and slaty wings and was standing on a distant mud bank. Scope views allowed us to see its pale eye and pink base of the bill. 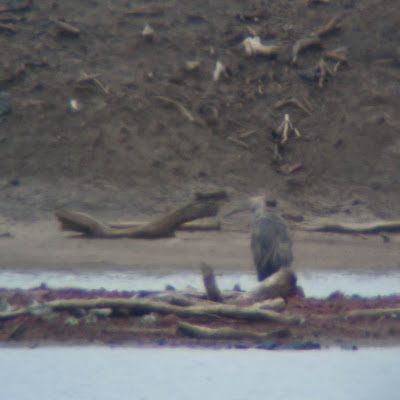