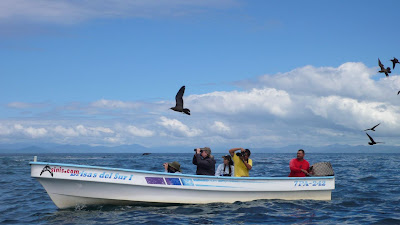 On the morning of Saturday, September 6, eight Panama Auduboners braved the ominous, overcast skies and headed out to sea for a morning of pelagic birding on our yearly fieldtrip to Islas Frailes del Sur. We headed straight out, saving the islands for the way back. On the way out we saw the first of many Wedge-rumped Storm-Petrels, which were not seen on our July scouting trip. At the end of the day we were up to 16 wedge-rumpeds, with a single, unidentifed storm-petrel with a dark rump. We stopped about 20 km offshore and drifted for a long, seasickening while, while trying to lay a good, smelly oil slick to try and lure something in. Sure enough, not an hour had passed when we had a Sooty Shearwater fly in and look around for a bit before continuing on its shearwaterly business. We then wandered about aimlessly to get some fresh air on our green faces and found an unidentified phalarope and two more wedge-rumped storm petrels sitting on the water.
Eventually we approached Frailes del Sur, which was as always covered in Brown Noddies (over 400) and Bridled (maybe 200, about 15 juveniles—including one begging from a nearby adult) and Sooty Terns (about 50, mostly near the base of the lighthouse). Two Galápagos Shearwaters chased each other around our boats for a bit, sometimes coming close enough for us to check that they were not something rarer. These were the only galápagoses we encountered, whereas in July we had about 80. While all the group was looking at the rocks, Delicia looked back and noticed a Humpback Whale waving its fins and tail at us, not 200 meters away. We all forgot about birds and gave all our attention to our fellow mammal. It splashed a few more times, then swam off on its whaley business, and only then we remembered the birds. We looked at the Brown and Blue-footed Boobies for a while and then headed for Islas Monjas (a.k.a. Frailes del Norte), where we saw more of the same, plus a Surfbird.
Olmedo Miró has posted his photos of the event on his smugmug gallery.
bridled tern galapagos shearwater islas frailes sooty shearwater sooty tern surfbird wedge-rumped storm-petrel