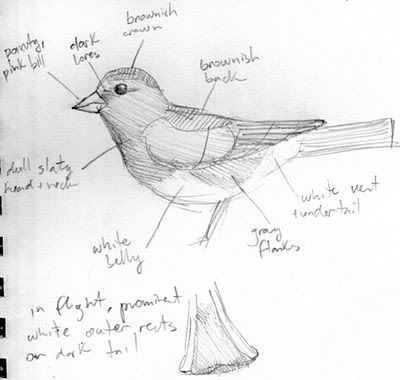 Delicia and Darién Montañez happened upon a Dark-eyed Junco while christmasbirdcounting on Fort Sherman. The bird looked like a slate-colored female (or juvenile): pointy pink bill, slaty head and neck (darker around the lores), white belly and vent with slaty flanks; the crown and back were brownish gray, and the dark-slate tail had very prominent outer rectrices, which the bird flashed conspicuously while in flight. These white flashes were what first caught my eye as the bird flew towards me across a field (hopefully in response to my fierce pishing). It perched on a tree about three meters over the road and preened for two minutes (enough time for Delicia to arrive). It then flew back across the field and perched atop an old chain-link fence, then dropped to the grass and hopped around for a minute before flying off towards some abandoned shed. It didn't seem to pay much attention to the small flock of Variable Seedeaters that was feeding nearby, and came and went as it saw fit.

This junco was seen at the sheds on the southeast edge of old Ft. Sherman, at the final T-junction before the road towards Fort San Lorenzo. This is the second Dark-eyed Junco to grace our shores. The first one, who now rests at the Universidad de Panamá, was captured at the Gatún Drop Zone in 1992. Seems Sherman is the place to go for ship-assisted strays (European Starling and Lined Seedeater, anyone?).
dark-eyed junco fort sherman