Cerro Santiago and Cerro Colorado, a report by Bill Adsett 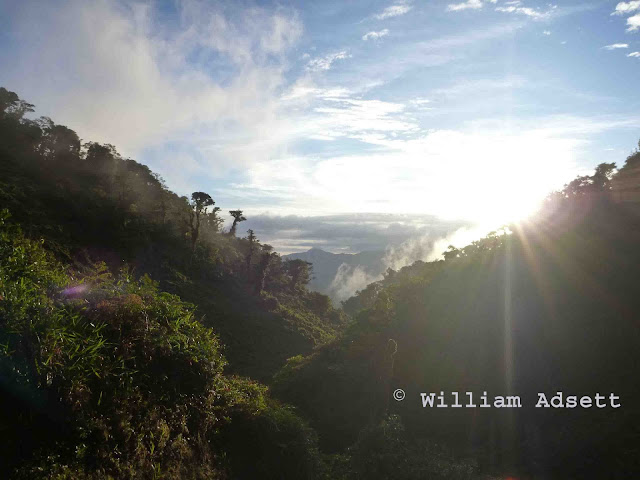 Charles Davies, Jan Axel Cubilla, Dan Wade and I made a trip to the Cerro Santiago and Cerro Colorado area from August 8 to 11. The road is now asphalted all the way to Entrada de Hacha (correct name for "Acha" in Where to Find Birds in Panamá) on the Continental Divide, ie beyond the area on the flanks of Cerro Santiago commonly—but erroneously—referred to as Cerro Colorado, where sightings have been made in previous years of the two endemics, Yellow-green Finch and Glow-throated Hummingbird. 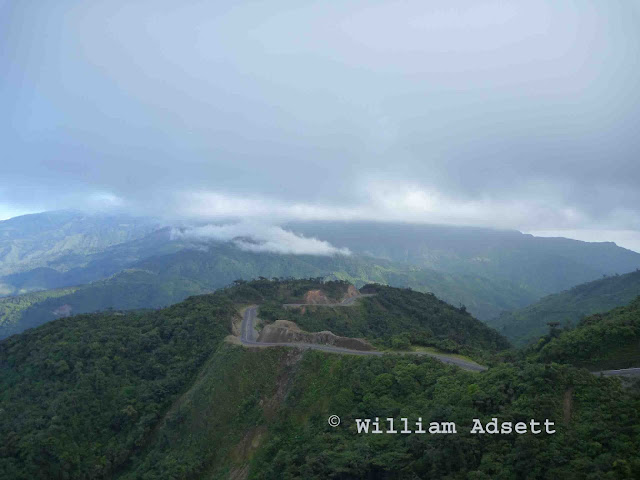 We continued beyond Entrada de Hacha on the rough track that after a kilometer or so goes over the real Cerro Colorado and thence to the village of Ratón, where it ends. 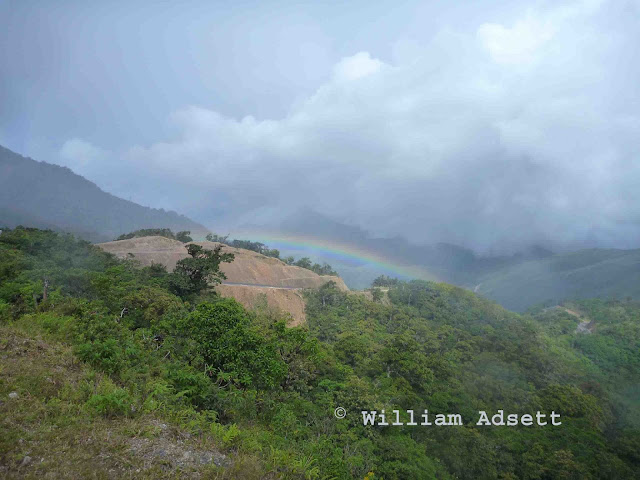 We stayed right on the Continental Divide at a basic cabin we have dubbed the Yellow-green Finch Ecolodge, about 4 km beyond Entrada de Hacha. Accommodation here costs $5.00 per night—great views and great birds! 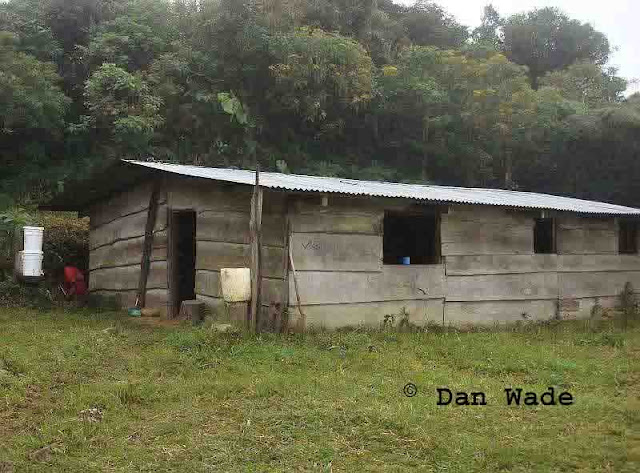 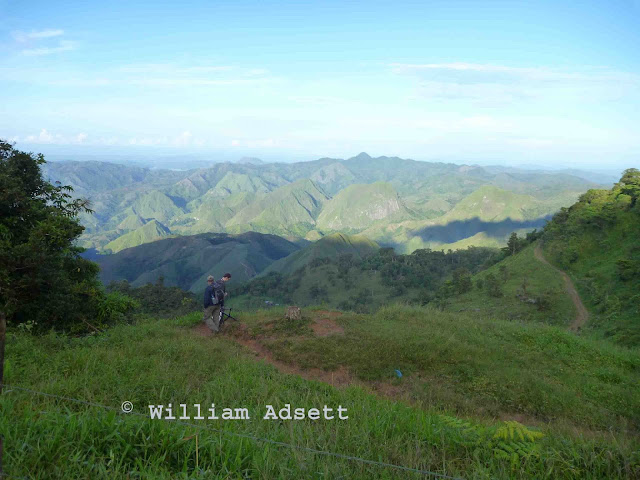 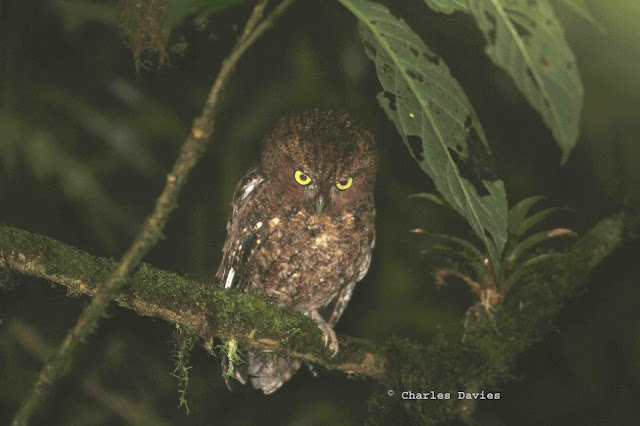 At and near the cabin we had good sightings every day of the finch and other good birds such as Bare-shanked Screech-Owl, Silvery-fronted Tapaculo, Slaty-backed Nightingale-Thrush, Black-faced Solitaire, Prong-billed Barbet, Chiriquí Quail-Dove and several other foothill/highland species plus the endemic races of Common and Sooty-capped Bush-Tanager, Black-cheeked Warbler and Ruddy Tree-runner. 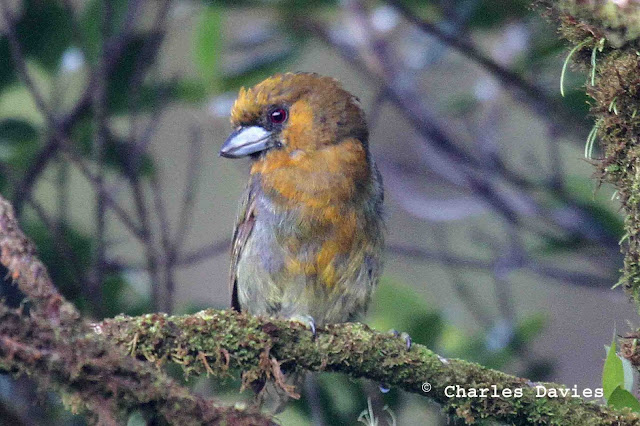 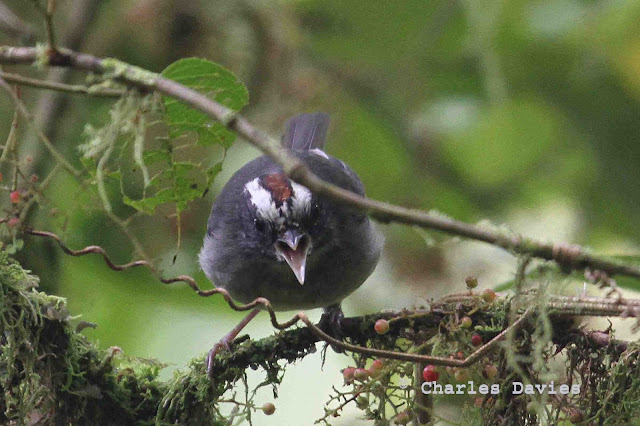 On August 9 we crossed to the Atlantic side and walked up Quebrada Ngwoini, a river that parallels the Divide at about 1500 m and has its source in the 2500 m high mountains behind Ratón. On this river we added two new birds to the list of several species we have previously found here way east of or above their previously known ranges; Brown-capped Vireo and Barred Becard. Another noteworthy sighting on the river was American Dipper. 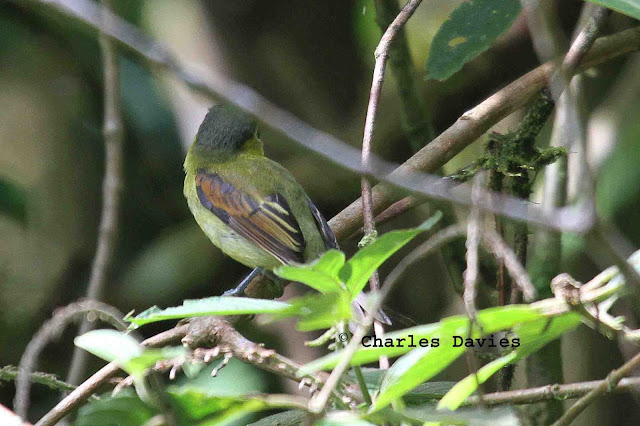 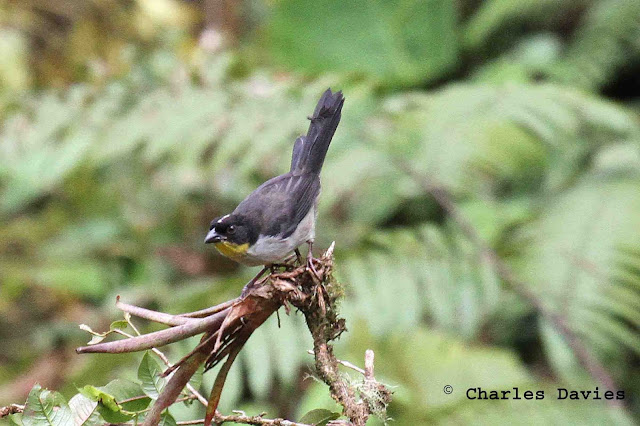 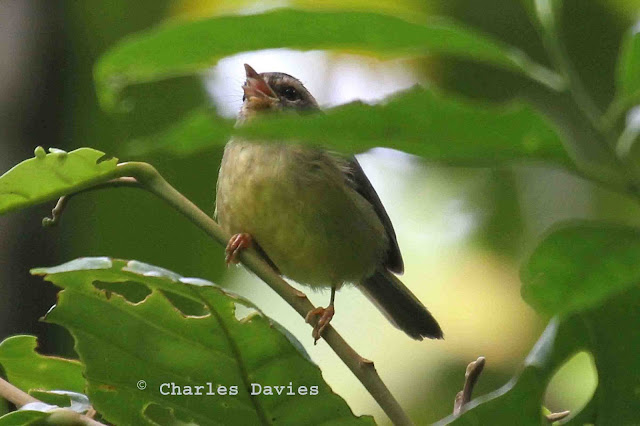 Walking the forest trail above the cabin, at just under 1750 m, we encountered a Spotted Woodcreeper, also well above its previously-recorded altitudinal limit.

A common tree in the area that has white tassle-like flowers was just starting to bloom, attracting Selasphorus hummers. True to form, many female-plumaged individuals of slightly different colorations were seen both east and west of Cerro Colorado. All had dusky spots on the throat. Some had darker bellies, which we judged to be Scintillant Humingbirds while others mostly to the east of Cerro Colorado had very light-colored bellies, in some cases white; these we assumed to be Glow-throated Hummingbirds. 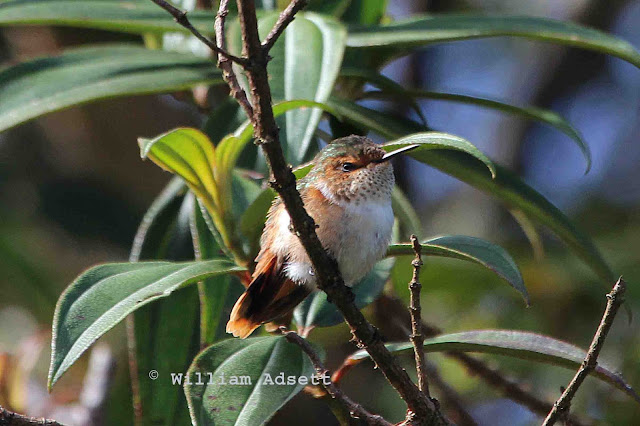 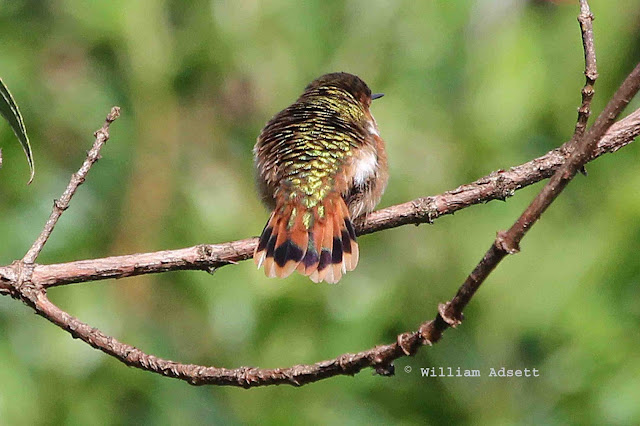 One of the latter was well-photographed and needs to be compared with museum specimens and Stiles's work on the two species. Note the distribution of colors in the tail and lateral tufts of white feathers behind and above the legs (the latter also a feature Magenta-throated Woodstar which is present in the area, so very careful checking had to be done). 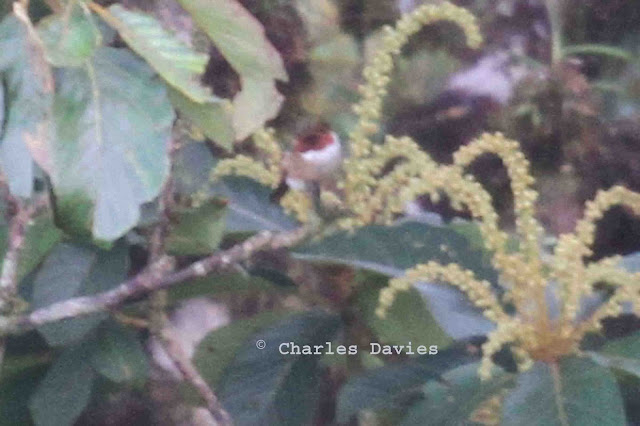 Finally a male Selasphorus was seen by Jan Axel in forest in a valley below the main road on Cerro Santiago at about 1600 m. This bird showed itself very occasionally and always at an annoying distance from the road, but eventually Charles got some grainy pictures. After several sightings and critical evaluation we decided that the bird had a rose-red rather than orange red gorget, thus identifying itself as a Glow-throated and not a Scintilllant Hummingbird. (Note: Some illustrations and text in the field guides—and even in Wetmore—are, in our opinion, confusing and incomplete.) 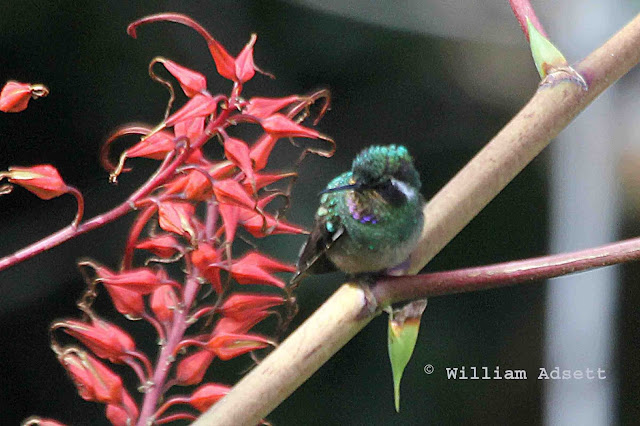 Many of the banks where years ago Glow-throated Hummingbird males could occasionally be located feeding on low shrubs have been bulldozed down to bare earth during road improvement. Some vegetation-covered banks still remain, however, but in July/August these are covered with flowering ground epiphytes that attract many Purple-throated Mountaingems, Green Violetears and Stripe-tailed Hummingbirds—but no Selasphorus. 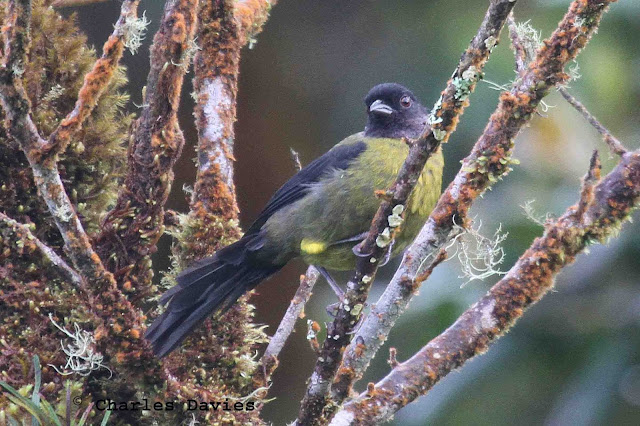 The road-building has also pushed the forest back from the road, making it difficult to find and observe Yellow-green Finch and other forest-interior birds. The best area to get a good look at those species is now on the forested sections of the track beyond Entrada de Hacha.
bare-shanked screech-owl barred becard cerro colorado cerro santiago glow-throated hummingbird prong-billed barbet purple-throated mountain-gem white-naped brush-finch yellow-green finch