- sábado, julio 30, 2011
Last week Moyo Rodriguez and I (Venicio Wilson) guided a couple of dutch birdwatchers, Yvonne and Atze, into eastern Panama. We had and incredible luck finding birds we had not seen yet in the previous months of development of a new Canopy Tower tour to the Darien lowlands.
Orange-breasted Falcon was seen near the ‘Mirador’ in Nusagandi, Guna Yala. A pair was spoted by the group and Moyo noticed the large size of the bird. Once we stopped the car we heard clearly the falcons' calling and realized the call was nothing similar to a Bat Falcon, which are much more common.

After playing the Orange-breasted Falcon call the female flew some 40-50 meters above us allowing us to see her breast band! Later we saw the same couple perched and I made some crummy pictures that I still like to share with you. 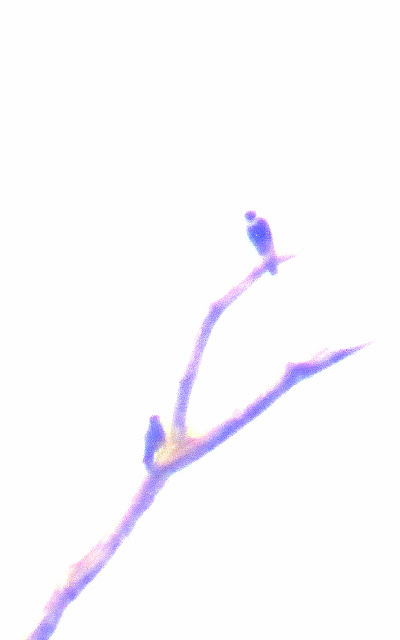 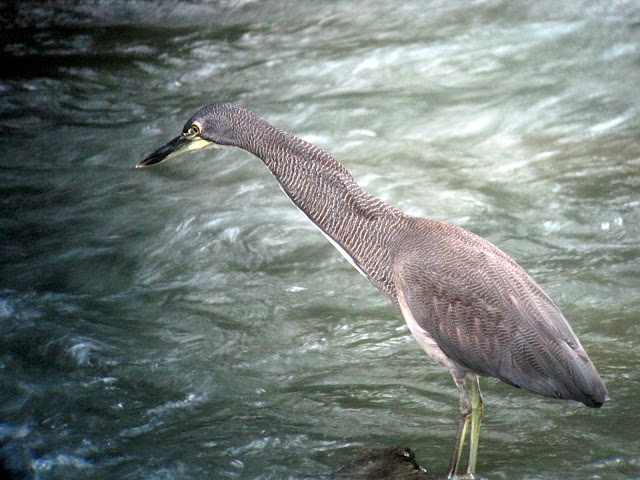 During our second day we birded the Torti river before breakfast and found a Fasciated Tiger-heron wading the river. Lots of Buff-rumped Warblers were also found in this spot. We had to improvise a birding spot since the Embera Indians from Arimae closed the Panamaerican Highway to get the attention of the autorities regarding their ancestral land being invaded by teak plantations and cattle ranchers. 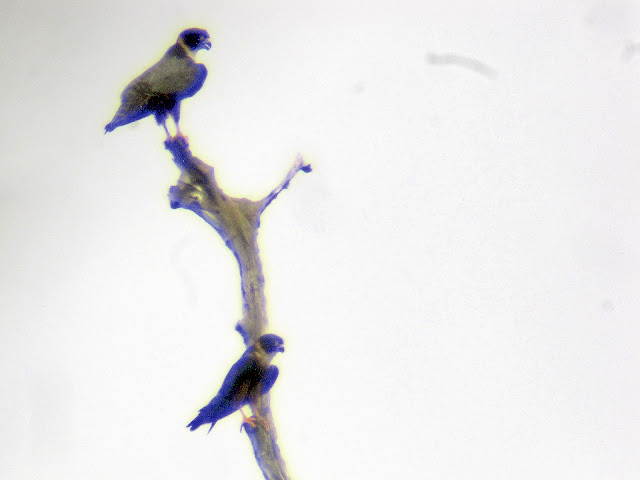 We visited the community of Vista Alegre Embera, where we saw a couple of Bat Falcons that were just too large! I post these pictures also since, to me, they looked like Orange-breasted Falcons. The Embera indians told us that the latin farmers shot dead the Harpy Eagle that used to nest near the community. The good news is that there are some nice patches of forest in the way where we managed to see Red-rumped Woodpecker, Laughing Falcon, Crane Hawk, Black-headed Tody-Flycatcher and Brown Chested Martins. 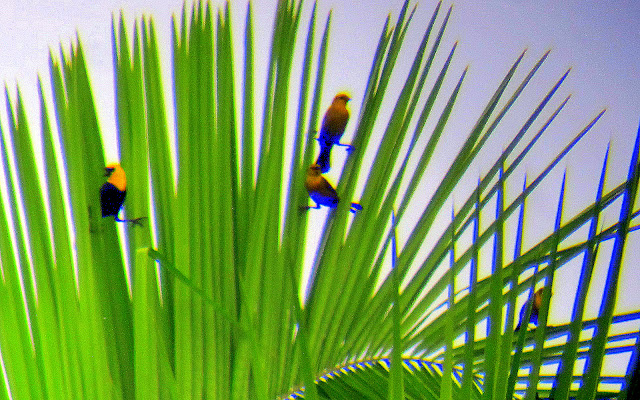 In the afternoon we drove towards Yaviza. Rick Morales, who is walking from the border with Colombia to the border with Costa Rica, saw Yellow-hooded Blackbirds here 3 weeks ago. I mentioned this to Moyo who has seen this species before in Trinidad and Tobago. As we drove near Nuevo Bijao, Moyo stopped the car to show us a small and very active flock of 7 females and 1 male of Yellow-hooded Blackbirds. Together in the same field where also 3 Black-capped Donacobius. Later, near Yaviza, we found at least 5 Black Oropendolas. 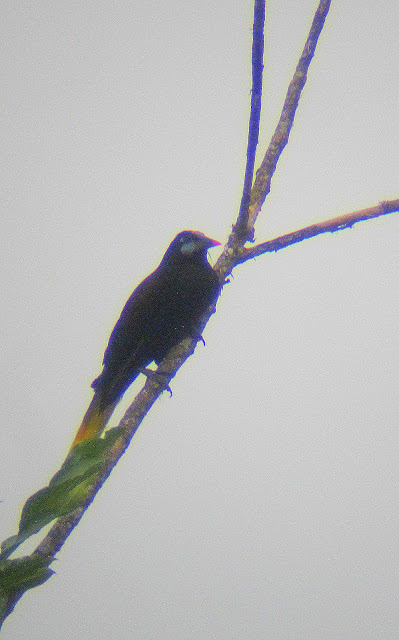 Day 3 turned out lots of surprises. We stopped for a Spot-breasted Woodpecker and found several dozens of Yellow-hooded Blackbirds, some Black-capped Donacobius and at least 3 Gray-breasted Crakes that were calling constantly. We managed to get some glimpses of these birds later. 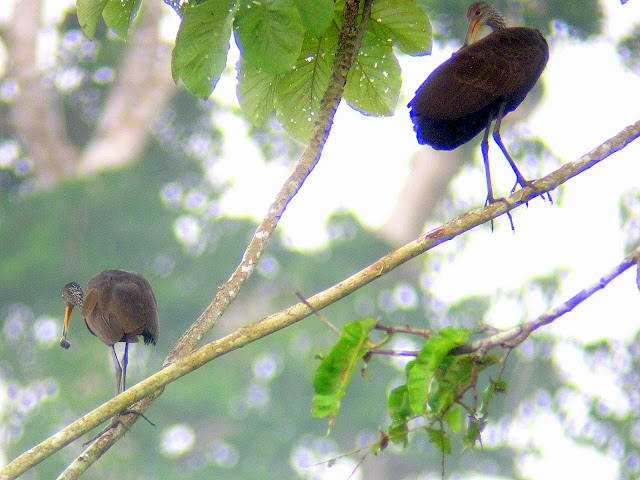 This spot offered the best birding that day with Limpkin, Capped Heron, White-headed Wrens, Striped Cuckoos, Giant Cowbirds and Black Oropendolas. We found at least two other spots near Betzaida and the entrance to Mamey with dozens of Yellow-hooded Blackbirds. 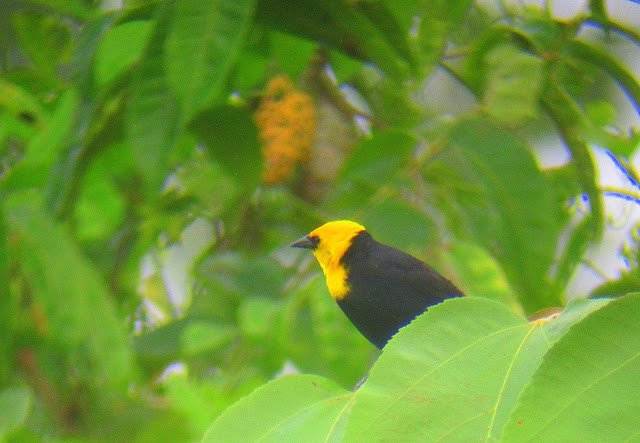 While waiting for SENAFRONT to answer our request to visit a town in the Chucunaque River, a Bicolored Hawk was seen flying and been bombarded by flycatchers. Moyo heard the bird and thought first it was a Barred Forest-falcon. After playing the falcon call the Bicolored Hawk showed right above our heads.

We spent the last hours of the day in Fundacion Tierra Nueva where we managed to get nice views of Spot-crowned Barbet, Black, Crested and Chestnut-headed Oropendola, White-winged Becard, Black-billed Flycatcher, Yellow-breasted Flycatcher (heard mostly), Gray-cheecked Nunlet, Black Antshrike and Black-crowned Tytira. The best finding was a male Orange-bellied Euphonia which we identified by its distinctive short rounded yellow crown. 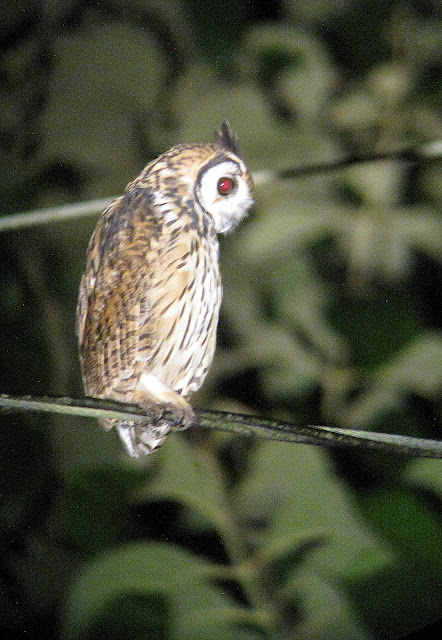 After dinner in Arreti Guest House we found 2 Great Potoos hunting under the lights in their front yard. Later in the way to Torti we had Striped Owls in 2 different spots. Acording to George Angher in his new “The Birds of Panama, a field Guide” these owls had a range that finished near the Mamoni River. This is a range extension of over 140km. Not a good news since this is a species of the open field/forested grasslands that are replacing the existing forest. 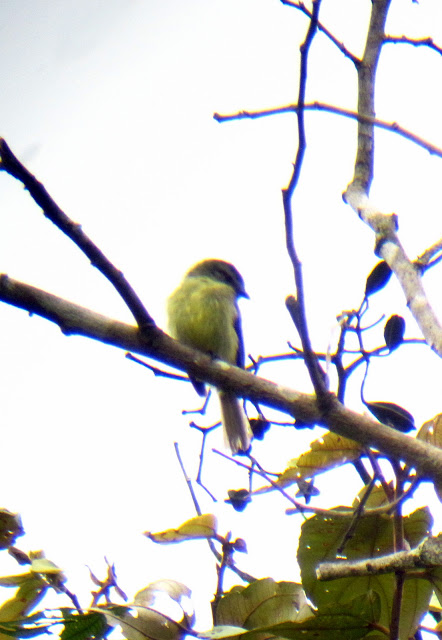 On our last day in Darien and eastern Panama we visited Playa Chuzo to find the trails flooded by the persistent rains. Despite of the weather and poor conditions of the trail we saw some nice birds such as Royal Flycatcher, Sooty-headed Tyranulet, over a hundred Brown-chested Martins, Sapphire-throated Hummingbirds, Long-billed Starthroat and Crimson-crested Woodpeckers. In the road to Playa Chuzo we also saw Savanna Hawk, Pearl Kite, Olivaceus Piculet and Plain-breast Ground-dove. 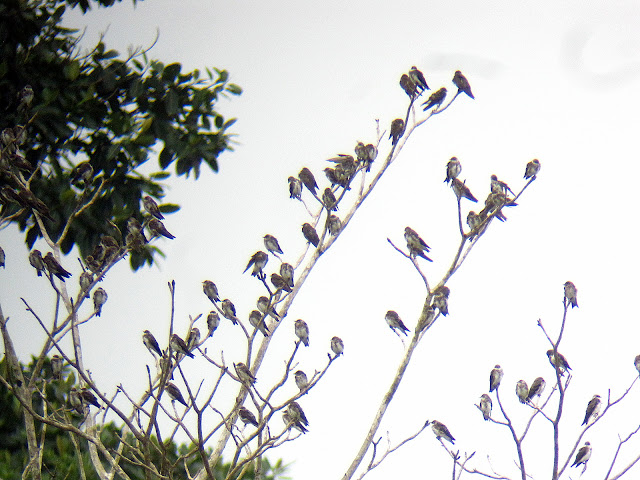