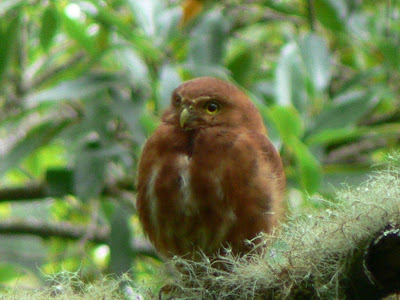 A few of us Boquete Birders saw both a Costa Rican Pygmy-Owl and a Maroon-chested Ground-Dove during a recent bird outing [August 10]. Our elevation was about 2100 meters where the pair (male and female) of ground doves were spotted. The area has thick stands of bamboo growing alongside the road. The ground doves “calling” is what drew our attention to them. Unfortunately I was unable to catch a photo of the ground doves as they moved about. We spotted the owl perched and at a slightly lower elevation along the road. We were viewing a Scintillant Hummingbird when the owl was noticed directly behind and a few feet away. 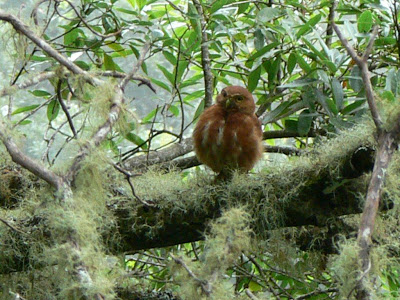 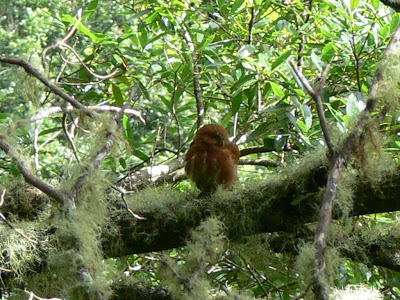 About the ground-dove, Craig Bennett says:

As for the ground-doves we were watching, I can only come to the same conclusion we had in the field - Maroon-chested Ground-Dove. In the poor light conditions of the first bird we observed the clearest characteristic I noted was the two solid wing bars. The Costa Rica book says "the only CR dove with wing bars; also has white outer tail feathers." We also noted the flash of white when the bird flew. Later when we saw the bird again it was the dark wing bars that stood out. The only other dove that has anything close to wing bars is the heavily spotted Blue Ground-Dove. Not only does the Blue Ground-Dove not have solid wing bars but the outer tail feathers are black, no white in the tail at all. In addition the Blue Ground-Dove's range elevationally is up to 4,000 ft in the Costa Rica book and up to 5,300 ft in Ridgely. In either case we were higher on the mountain than that. So again my opinion is that we had multiple sightings of the Maroon-chested Ground-Dove. Great bird — another rarity according to Angehr.