Coiba and Azuero, a report by Ken Allaire‏ 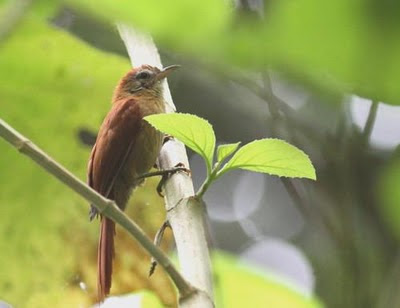 Yesterday, June 19th, Björn Anderson, Gonzalo Horna, and I ventured to Coiba Island, where in only a few hours (before heavy rain came) on the Pozos Termales Trail, we were treated to crippling views of both Coiba Spinetail and Brown-backed Dove. Björn obtained excellent photos, and I collected good audio recordings—I will make these available to amy one who asks. We also saw most of the island endemic subspecies, collected many recordings and photos of these, and tried a couple of intriguing playback experiments. As a bonus we observed a Galapagos Shearwater (thanks to Björn) about halfway between the island and the mainland. 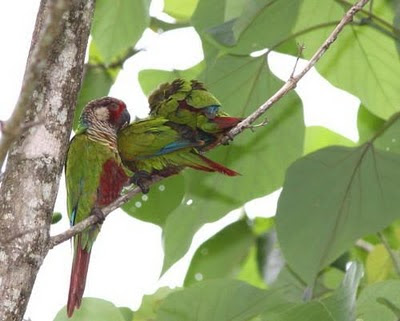 Today (20/6) we ventured to the Velásquez farm to enjoy Azuero Parakeets, and were not disappointed—the parakeets came in like clockwork around 8:30, and up to 30 birds at a time were enjoyed for several hours. We also were delighted to run into Beny Wilson and an all-star group of Panamanian birders, who were smart enough to sleep in and show up just after the parakeets arrived! It is worth mentioning that the Velásquez family is delightful, they are intelligent and charming, and it is obvious that they are thrilled for both the income generated by the visitors and for the experience of hosting them. Their land is surrounded by some pristine forest that contains many of the regional specialties, it is worth visiting for more than just the parakeet. It should also be made public that the parakeets only are present here from early May to some point in June, after which they move upslope, and it once again gets to be a serious chore to find them. Get to Finca Velaquez soon!
azuero parakeet brown-backed dove coiba coiba spinetail