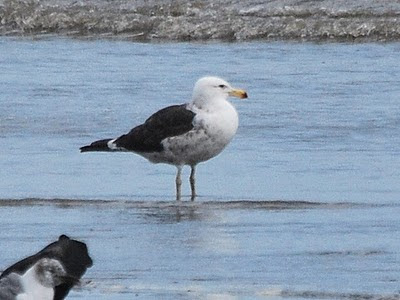 [This bird has been proven to be but a subadult Kelp Gull. Apologies]
Jan Axel Cubilla uploaded the photos of the Belcher's Gull [sic] he found in Costa del Este on Sunday afternoon to his blog.

What immediately caught my attention was a huge dark-backed gull standing alone in the shoreline. It was considerably larger than the Laughing Gulls and than the Ring-billed Gull present, with a bulkier shape and heavy yellow bill tipped in black, followed by red (wider in the lower mandible). Dark eye. Pale yellow(ish) legs. Head and breast completely white, with no streaking. Sides of neck, flanks, belly and upper back white with diffuse dark spots. Back and wings black... blacker in the wings and with a brownish tinge in the back (specially with the bright light). The secondaries had wide white tips. I didn't see the tail while the bird was standing. I thought first it was a Kelp Gull, but then the bird took flight, showing a white rump contrasting with the mostly dark tail! It also showed a wide trailing edge on wings (the tips of the secondaries) and almost no pattern in the underwings (pale with lots of dark markings). Checking my photos I saw a mostly dark tail, with some white on it closer to the rump.

So what do you think? A quick check of the literature produced no mention of the dark mottling on the flanks, as basic-plumage Belcher's show dark hoods and older birds usually have plain underparts. The bill does not look heavy enough for the similar Olrog's Gull from Argentina.
More details as they become available. 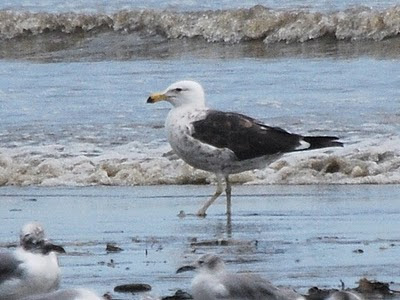 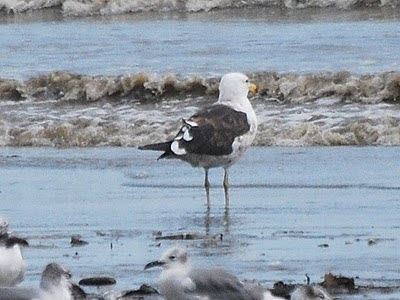 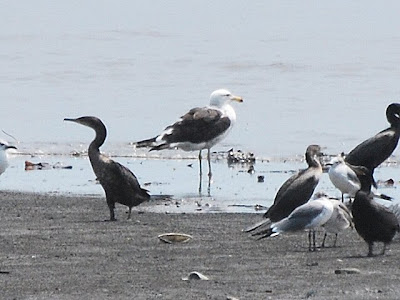