- miércoles, noviembre 25, 2009
Barry Zimmer sends in the highlights of three Panama tours led on October and November.
Blue-footed Booby - 100+ off Costa del Este (east of Panama City) October 19 feeding very close to shore; more impressive was more than a thousand along the beaches (and covering an offshore island) off Santa Clara and near Juan Hombrón November 12

Swallow-tailed Kite - two from the Canopy Tower October 18 seemed very late. I have not seen them here in October before.

Collared Plover - pair at Panama Viejo October 23; only my second for Panama

Long-billed Curlew - one found and photographed at Panama Viejo October 23; this is the third or fourth time I have seen one at this location in the last ten years (maybe the same bird coming back to winter each time?); attached photo

Black-billed Cuckoo - one seen on La Mesa above El Valle October 25; only my second in Panama

Touit species - a group of four Touit parrotlets came low right overhead on Los Altos del María on October 26. From the view I had I could not distinguish which species as I was either looking straight up or at the flock going away so I could not see the head clearly, However my co-leader Danilo Rodriguez says that only Blue-fronted has ever been documented in this region of Panama, so I am assuming that is what they were.

Spot-crowned Barbet - three just above the Canopy Lodge on November 8 were my first for that location; also had a pair at Cerro Azul October 19 and another pair at Achiote on October 21 (more expected locales). 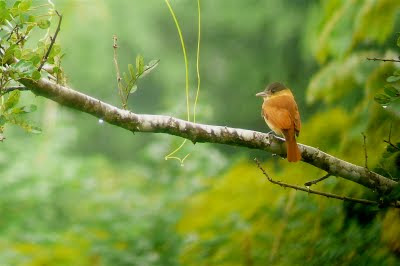 Rose-throated Becard - one female found and photographed just outside of El Valle on the Las Mozas trail November 10. I am guessing this is a fairly significant record as Danilo had never seen them there before and Ridgely indicates only records for the Chiriquí region. Even given that the species has expanded in Chiriquí I would think this could be a southernmost (easternmost?) record.

House Sparrow - we had a pair in Panama City on October 23 which were my first for that city. I had previously only seen them around Colon, but perhaps they have now spread into Panama City with regularity.
black-billed cuckoo blue-footed booby collared plover house sparrow long-billed curlew rose-throated becard rufous-browed tyrannulet sharp-shinned hawk spot-crowned barbet