While leading an Advantage Tours birding group on our way back from Coiba Island last Saturday June 20th, I decided to break the drive and do a brief visit at Las Macanas wetlands. Upon our arrival we were greeted by a covey of Crested Bobwhites at the parking lot, promptly followed by views of Mouse-colored Tyrannulets, and flocks of Black-bellied Whistling-ducks, as well as a vocal Rufous-browed Peppershrike. Later we saw a pair of Pale-eyed Pygmy Tyrants near some Common Tody-flycatchers, and a flock of "Veraguan" Brown-throated Parakeets. While walking around the water's edge, we saw lots of Grooved-billed Anis and were fortunate to spot a roosting Striped Owl. 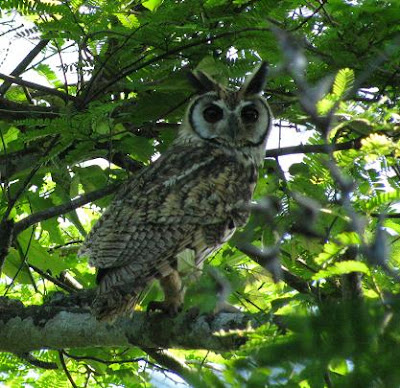 Towards mid-morning we decided to wrap it up. Back at the parking lot we heard a pair of Gray-necked Woodrails nearby and decided to wait under the shade to try to see them. Suddenly, a cuckoo flew in front of us and perched on a tree about 15ft. high some 30 ft. away from us. At first I thought it was just a Yellow-billed Cuckoo, but when it flew to another nearby tree I didn't notice any rufous in the primaries, and it seemed to have a much duller gray-brown. I thought it may just be a stranded young Yellow-billed... However, having heard about the possibility of the similar-looking Pearly-breasted Cuckoo in Panama, I decided to try to document the sighting. I managed to shoot a couple of pictures with a small point-and-shoot Canon Camera. What do you think ?
On the way out to the highway we stopped at some fields and found a bunch of egrets as well as 7 Glossy Ibises, Yellow-headed Vultures and a pair of Aplomado Falcons. 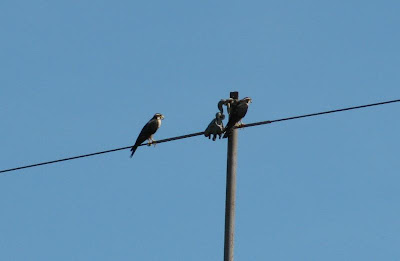 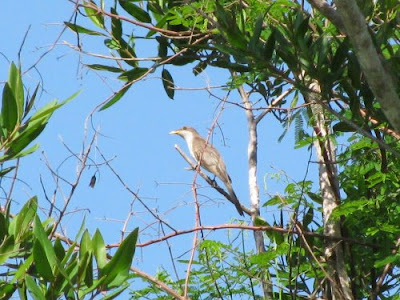 The cuckoo is, of course, the most interesting bit. Yellow-billed Cuckoo has never been formally recorded in Panama during the boreal summer (no records from mid-May to mid-August), although (as pointed out by Guido) there are "immature [specimens] collected in South America in [the boreal] summer." The other possibility is, of course, Pearly-breasted Cuckoo, which again has never been formally recorded in Panama. We are only aware of its existence because of a recent reevaluation of an odd cuckoo photograph from 2007. Apart from a minimal difference (and the fact that Pearly-breasted is a really rare vagrant to northern South America), the best field mark is the lack of rufous on the primaries typical of Yellow-billed Cuckoo. This is very evident in flight, but can be seen even on perched birds. According to Guido, they did not see any rufous on their cuckoo's wings:

What do you think? Do you see any rufous on the wings? Do you have any insights that the Panama Records Committee should consider when considering this record? 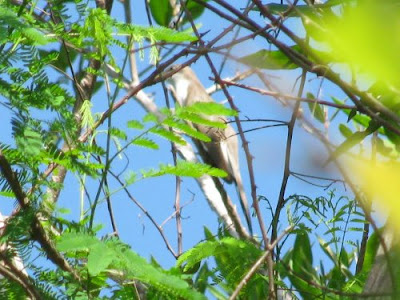 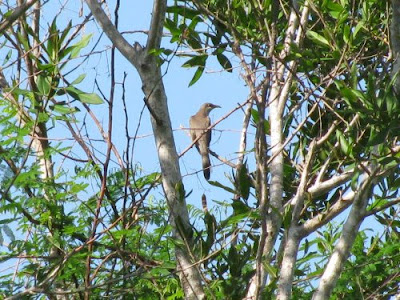