Birding above Santa Fe, a report by Bill Adsett 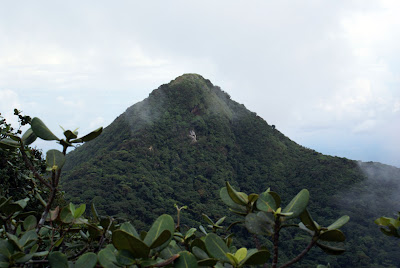 Botanists Alicia Ibañez, Fermín Hernández and Bonarge Rodríguez and I—the lone birder—spent two days in Santa Fe. On June 18 we ascended Cerro Mariposa using the route described in Where to Find Birds in Panama. (Note: In a previous message I said that this trail probably went to Cerro Delgadito; in fact it does go to Cerro Mariposa which is separated from Delgadito by a narrow canyon). The trail was not easy—long, much overgrown, muddy, rocky and very steep in places. There were recent cat tracks—probably ocelot—and an older Baird's Tapir print. The height of this hill is not marked on the map but using our GPS reading on Google Earth it is 1,364 meters (somewhat higher than expected). Very few birds were seen, but near the top we ran into a bit of higher elevation stuff—Common Bush Tanager, Collared Redstart, Ruddy Treerunner, and Purple-throated Mountain-Gem. On the summit, there was a sizeable flock of Chestnut-collared Swifts (40 individuals or more) accompanied by some dark unmarked swifts of the same shape and size (immatures of the same species?) and a few White-collared Swifts. The summit is covered with dwarf vegetation including a bush that so far has so far only been found on the top of that one cerro—Ladenbergia nubigena. 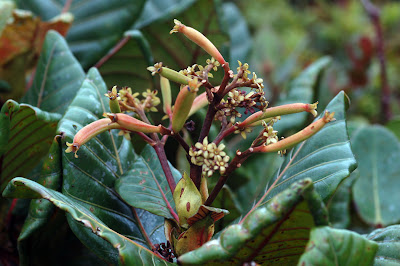 For birding purposes, anyone going there would do better than I did by camping overnight at or near the summit.
The next day we went to Cerro Tute and revisited the Wedge-tailed Grass-Finches. A mature male was photographed—note mostly yellow beak, conspicuous eyering, yellow on wing and uniformly dull underparts. 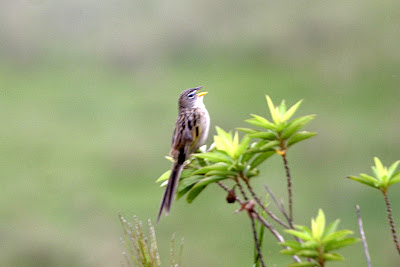 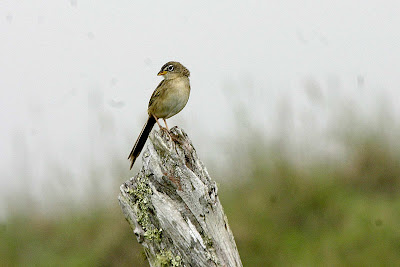 An immature was also photographed—note no yellow on beak and wing, very narrow eyering, very yellow throat and yellow wash on underparts. 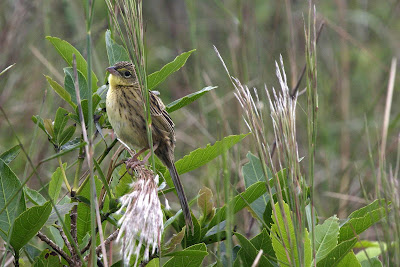 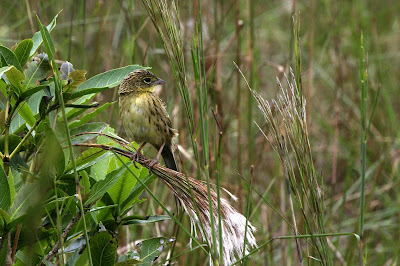 The only other noteworthy bird there was a Magenta-throated Woodstar.