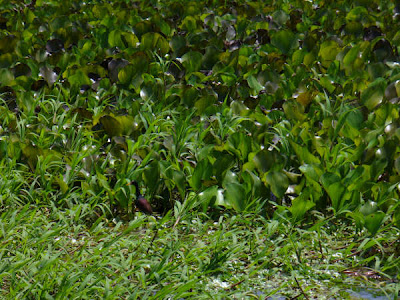 Gonzalo Horna photographed this weird Wattled Jacana on the Chagres River on Tuesday April 7. The maroon back shows it not to be of the subspecies hypomelaena that is normally found in Panama (and northern Colombia), but one of the five others found in South America. If on closer observation a number of black scapulars are seen it would be a scapularis of western Ecuador, otherwise it's anyone's guess between melanopygia of western Colombia, intermedia of Venezuela, jacana of Guyana to Argentina, or peruviana of Peru.
Another maroon-backed South American Wattled Jacana was seen at Ciénaga de Las Macanas on July 28, 2002.
wattled jacana