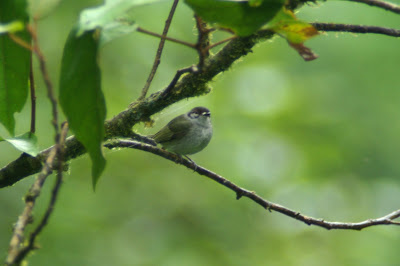 While exploring Panama for their third time, members of the Tennessee Ornithological Society, led by Advantage Tour's Guido Berguido, birded the Cerro Gaital Nature Monument and other cloudforest ridges above El Valle on January 24th, 2009.
Despite the constant bajareque in the mountains close to 3,000 ft., we managed to push on and were rewarded with a few interesting sightings including Brown-billed Scythebill, Snowcap, Tufted Flycatcher, Black-and-yellow Tanager and many individuals of the punctulatus race of the Common Bush-tanager. I was particularly glad to see a few Rufous-browed Tyrannulets in the mixed flocks, and very happy to learn that tour member Michael Nelson had taken some shots (see attachment). This was only the second time I ever see this species : )
We were quite delighted to find numerous warblers on the flocks including Canada, Mourning, Blackburnian, Black-and-white, a pair of Golden-winged Warblers, and even Wilson's and one Yellow-throated Warbler.
brown-billed scythebill el valle golden-winged warbler rufous-browed tyrannulet snowcap yellow-throated warbler