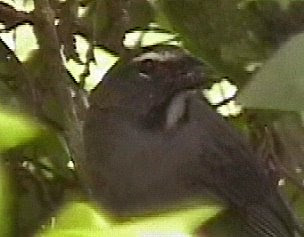 The best find in August was a Grayish Saltator found on the grounds of Villa Marita in Boquete on 8/13. I was hanging out waiting for a ride when I spotted this bird (there may have been two on the grounds) - I was quite surprised, and chased it for well over an hour before I finally collected a little evidence; a still from video is attached. I believe this is a first record for Chiriquí; given the location, I suspect this bird(s) came from the Pacific slope of Costa Rica, rather than crossing the Continental Divide from Bocas. Another highlight of the day was a Pearl Kite seen quite well from the bus on the way in.
On 8/9, on the grounds of the Canopy Lodge in El Valle, I found Black-throated Mango (unexpected at the elevation), Rufous-vented Ground-Cuckoo, Sepia-capped Flycatcher, and Eye-ringed Flatbill. On 8/14 I found Yellow-margined Flycatcher and Wedge-tailed Grass-Finch on private property north of La Estrella, east of Boquete. On 8/16, at Finca Lérida above Boquete, highlights of forest birding included Highland Tinamou, Barred Parakeet, and Scaly-throated Foliage-Gleaner. The biggest surprises for the property came from the farm itself; a male White-crested Coquette was in the gardens near the restaurant (apparently present for several weeks), and Rosy-thrush Tanager was common on the coffee farm, at an elevation of 1800m considerably higher than mentioned in Ridgely. On 8/17 I moved to Bocas del Toro for a few days; of the regional specialties, a Snowy Cotinga seen on the Almirante-Changuinola road was a big highlight. On the road to Guabito on 8/19, of interest were Plain Xenops (not mentioned from this locale in the Birdfinding Guide) and Brown-capped Tyrannulet (said to be quite rare here in Ridgely), the latter being quite common, seen often and heard even more. Back in El Valle de Antón, my best day was at Cerro Gaital on 8/29- I saw (briefly) the Scaled Antpitta again on the lower part of the Sendero El Convento- this bird is quite shy and seems not to respond to playback, and I suspect I have only found it because I have been birding alone, and very quietly! Other highlights of the day were Black Guan and Blue Seedeater. Finally, on a short walk on Pipeline Road on 8/31 I enjoyed crippling views of a Gray Elaenia, which perched quietly for several delightful minutes. As I write this I am in Amador, where I was surprised to find (and record) a vocalizing Vermiculated (Choco) Screech-Owl last night (9/2).
barred parakeet blue seedeater boquete el valle grayish saltator highland tinamou rufous-vented ground-cuckoo scaled antpitta white-crested coquette