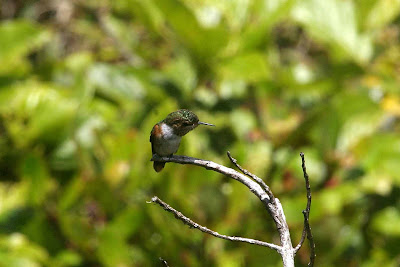 Bill Adsett sent in a report of a scouting trip to Cerro Santiago he and Dave Klauber did on April 3–4.

We saw a number of Glow-throated Hummingbirds. There were several on the Continental Divide in bright sunlight at 1618 m altitude UTM 0414657 - 0939884, 39.4 km from the San Felix turn-off on the Panamericana, about 1.5 km beyond the transmission tower. There were female(s), immature(s) and one very beautiful mature male. Terrible things to photograph though. They were feeding at pink and red flowers on small plants and shrubs in open areas along the road. There was another individual (female or immature) in forest close to Ratón UTM 0412085 - 0942967. I got a tape recording of the Yellow-green Finch call which I shall share in due course. The Bare-shanked Screech-Owl in the photo was near Ratón, while the Veraguan Mango was in San Félix. 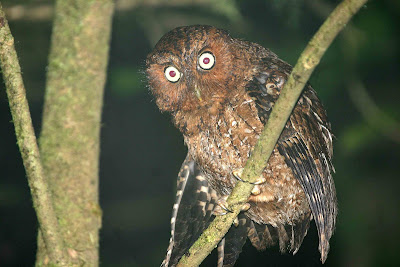 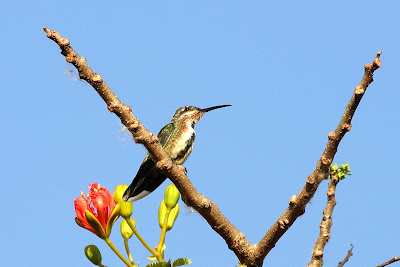 The road from San Félix (Chiriquí) is in good condition, easily passable in dry and wet conditions, as far as Cerro Flores, just above Hato Chamí. However, from this point all the way to Entrada de Hacha (14 km from Hato Chamí), the condition of the road can only be described as abominable, with large loose rocks on steep hills, enormous craters and deep gulleys. This part of the road is suitable only for experienced off-road drivers in strong 4WD vehicles with high clearance. In addition, tire chains are essential when the road is wet. (Note – This is the reverse of the notes on road conditions given in “Where to Find Birds in Panama” – things have changed dramatically in a couple of years!)