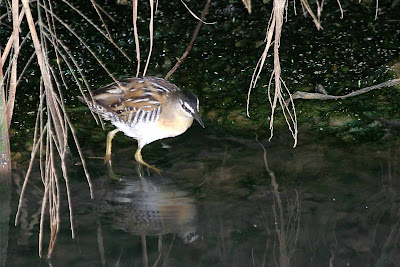 This morning [March 28] there were 5 of us who arrived separately, Bill Adsett and Mark (family used to own Tocumen) and Bill and Claudia Ahrens and me, arriving around 6:45. A Field Guides group led by John Rowlett arrived shortly after, but from talking with them they didn't see much different from what we saw. Rowlett commented on I think 6 Spotted Rails, 4 adults and 2 sub-adults. We probably had at least 4, including one or two adults and sub-adults, but no downy young, other than black downy Purple Gallinule chicks. We all had great, long views of a Yellow-breasted Crake (lifer!) and Mark may have seen one or two more. NOT seen or heard were Paint-billed or Gray-breasted Crakes. Several Soras were also seen. In the first hour or so there were only one or two, but a bit later a few came out, including at least two that were doing a strange wing shaking behavior in plain sight on the berm. White-throated Crake was heard by all and glimpsed by Bill.
Around noon as we were driving out I noticed a strange looking gray rail with a whitish throat. This was in the same spot where the Spotted Rails had been bathing and was in plain sight wading in the water. Bill, Claudia and I went back to look at it for a half minute before it walked from the water into the tall grass. My first thought was an immature Sora, but it does not really match anything. It was all slate gray: upperparts, head, undertail coverts, underparts, no barring whatsoever. The bill was a dull yellow that looked a bit more colorful at the base, possibly with a dull red tinge. Again the undertail coverts and crissum were dark gray, no buff, no barring, and the general size was that of a Sora. It was in good light so I saw it well. But this coloration is wrong for a juvenile (should have been buffier per Ridgely and the Natinal Geographic guide) or an adult (should have had browner more patterned upperparts, barring and at least a hint of a mask). Unfortunately I do not remember the leg color, but I'm sure it was not bright red. Any ideas or suggestions?
Also nice was a male Mourning Warbler in the scrub further south.