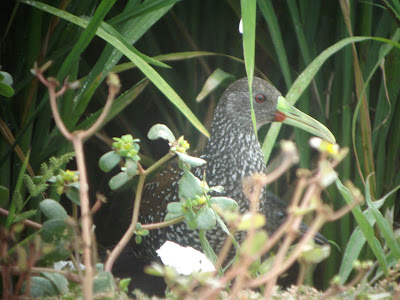 Carlos Bethancourt sent in apparently the first Panama record of Spotted Rail from Panama since 1984. The birds, an adult and chick, were seen this morning in Tocumen Marsh by Field Guides Inc.'s Chris Benesh and George Armistead and Canopy Tower's José Perez, who took the amazing photo above. They were at the edge of a rice field along the road to the beach. A flock of birders is assembling to hit the spot early tomorrow morning, so expect an update within 24 hours.
spotted rail tocumen marsh