"Golden" Yellow Warbler, a new subspecies of bird for Panama 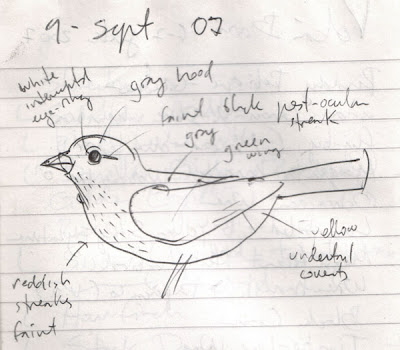 After a thorough search of the literature, the identity of a mystery warbler seen by Delicia and Darién Montañez and Olmedo Miró whilst on the PAS fieldtrip to Isla Escudo de Veraguas has been changed from the very tentative first guesses (weird Cape May Warbler? Nashville x Palm Warbler hybrid?) to something that is exactly halfway between the most common warbler in the country and a new warbler for the country: a new subspecies of bird for Panama.
Our bird was clearly a warbler, with a Dendroica-esque jizz. Its crown, cheeks and back were dull gray, contrasting with the olive scapulars, coverts and tail. The only markings on the face were a thin white incomplete eye-ring and a very faint black post-ocular stripe, for an effect similar to a female Mourning Warbler. The throat was white, the chest and belly were yellowish, and the undertail coverts were bright lemon yellow. But what really caught our eyes were the sharp, thin chestnut streaks that covered this warbler's throat, chest and flanks. We were mystified and field-guide-less. But now, after ten days of strenuous work, we have arrived at a solution.
There is a third 'group' of Yellow Warblers besides the familiar migratory aestiva ("Yellow Warbler") and resident erithrachorides ("Mangrove Warbler") groups. The petechia ("Golden Warbler") group is closely related to Mangrove Warbler and is resident in the West Indies, from southern Florida to the north coast of Venezuela. Adult males have distinct rufous crowns, but first-year males can show (fide Dunn et al.)

(...) an olive-gray forehead and crown and grayish auriculars and nape, with the remaining upperparts olive (blending to olive-yellow on the rump). The throat and inconspicuous eye-ring are whitish and the remaining underparts are pale yellow, with inconspicuous thin reddish streaks on the breast and sides.

That and the illustration, on plate 9, are a close enough match to our notes to declare this case closed. "Golden" Warblers are widespread throughout the Caribbean, but have never been recorded this close to the mainland. The closest population is D. p. flavida from Isla San Andrés, about 380 km North of Escudo. Isla Providencia, a further 100 km North, also has its own endemic subspecies, D. p. armouri.