The Crakes of the Ammo Dump 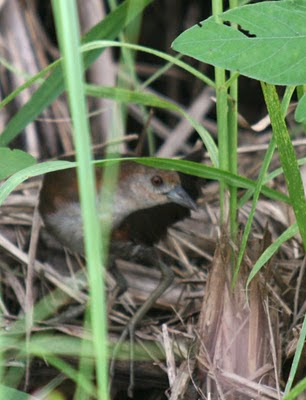 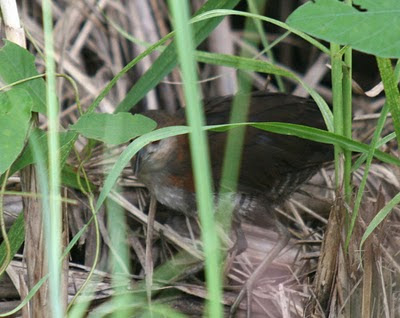 Sunny Phillips sent us these photos taken in early September 2005 near the entrance of Pipeline Road.
We are assuming it to be a Gray-breasted Crake until proven otherwise. It looks like a gray-breasted alright; maybe a non-adult because of the non-greenish bill. I can't find any description of juvenile gray-breasteds; birds of colombia says young white-throateds have gray sides of neck and breast, which doesn't sound as dramatic as these pictures. i don't know what young paint-billeds are like, either, but i'd imagine the chestnut nape rules out this species. Although there is also chestnut on the forecrown, which shouldn't be there on gray-breasted...Any thougths?
Dr. Dodge Engleman chimes in:
"Juvie rails are tough. Most likely demographically of course is a youngster White-throated that isn't brown on the breast yet. But with rails it's hard to go by demographics! It looks good for a Gray-breasted to me, either the young not having the dark side of face or it being an aberrant individual.
"Paint-billed is a Porzana (as opposed to a Laterallus) and the bill and size should be different, though these aren’t appreciable in the photo. My references to rails are pretty bad: none of them even recognize the existence of immature Paint-billeds let alone describe them. It would be a coup if it turned out to be a Paint-billed!"
There's been recent records of Gray-breasted Crake from Tocumen Marsh (C. Bethancourt et al. Sept. 22, 2006. see below) and Rodman Ponds (R. Miró et al. December 17, 2006. see below), but this would be a first for the Gamboa Area. The Ammo Dump ponds have been producing a series of sightings of the rarely-reported Yellow-breasted Crake. A family group was seen June 1 and 2, 2006 (E. Campos et al. details), then seen again on November 2 (A. Sánchez et al. details). A single adult was seen by Delicia Montañez and Jacobo Ortega on the early morning of the Central Christmas Bird Count on December 23. At dusk that same day, Rosabel Miró espied an adult crake of uncertain identity, followed closely by a chick. Clearly, an organized crake expedition to this easily-accessed site is necessary.

Dr. Robert Ridgely had this to say:
Interesting looking bird. But I would have to say that the simplest, and therefore most likely, explanation is that this is a juv. White-throated Crake. Well, why not? It just doesn't look like a Gray-breasted to me - Gray-breasted is a relatively tiny bird, hardly more in size than a Black Rail. This just doesn't look right for that.
ammo dump ponds white-throated crake yellow-breasted crake