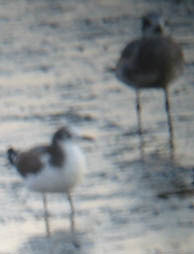 Bill Adsett, Loyda Sánchez, Delicia and Darién Montañez, Rosabel and Karl Kaufmann and Guido Berguido went to Costa del Este at dusk to look for the Kelp Gulls armed with all sorts of photographic equipment. After walking along the coast all the way to the river and checking on hundreds of Laughing Gulls, we discovered a group of gulls standing on the other side, the original Kelp Gull spot, so we rushed in that direction racing against the imminent darkness. Turns out everything was right there: (just) one Kelp Gull (first spotted by Loyda), at least two each of Herring and Ring-billed Gull and, the bird of the day, a juvenile Sabine's Gull. This bird, spotted by Rosabel, had a brownish back, nape and sides of the neck, and a white forehead, chest and underparts. It had a smudge of white behind the eye, and when it flew up Karl was able to see the black terminal band on its white tail. After that the bird was seen again, this time with its head tucked on its back, and in extremely low light, which made observation much more interesting. (Crappy pictures by Darién Montañez).
costa del este herring gull kelp gull ring-billed gull sabine's gull