Reddish Egret at the Gatún Spillway 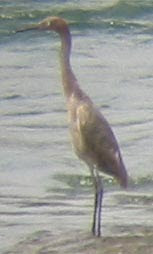 A juvenile Reddish Egret was seen at noon preening on the rocks below the Gatún Spillway by Gonzalo Horna, Darién Montañez and Guy Poisson. The bird was right next to an adult Tricolored Heron and was clearly larger than that (but smaller than a nearby Great Egret), pale grayish-cinnamon all over, browner on the head and neck and grayer on the rest of the body. The legs were dark gray, as was the bill, and it had pale yellow eyes surrounded by a bare patch of gray orbital skin. Upon approach by one of the observers it flew off to the other side of the Chagres River, but a few minutes later returned to the same rock on the right bank.
Just as a reminder, this Reddish Egret was right by the Tarpon Club parking lot, where the participants of the upcoming Atlantic Christmas Bird Count are to meet at noon this sunday to do the traditional mid-day recap, and that would be a great chance to add this rare vagrant to all your Panama lists. This is only the fourth (or fifth, depending on your standards) Reddish Egret reported from Panama, and the first sighting from the Caribbean Slope (a note for those of you working on your Colón Province lists).
(crappy photo by Darién Montañez)
gatún dam reddish egret