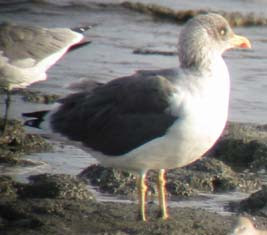 Rosabel Miró, Bill Porteous, Jan Axel Cubilla and Darién Montañez went to Costa del Este at high tide to try and find the Kelp Gulls but instead found an adult Lesser Black-backed Gull. This bird was not as big as the Kelps, and was much lighter on the back, but what really made it stand out was the dark streaking on the face and head, which made its yellow iris look even brighter. Its legs were bright yellow, and its yellow bill had a red gonys-spot (but the gonydeal angle was not as pronounced as on the Kelps). Also at the mud was a Herring Gull and two Ring-billeds (a juvenile and an adult), and a bunch of Franklin's Gulls mixed in with the Laughings.