- sábado, julio 15, 2000
On the first official day of the PAS fieldtrip to Santa Fe, Satuday, July 15th, 2000, we were joined by the rest of the group: Amalia Herrera, Cora Herrera and José Tejada. Early in the morning we saw a female Bare-necked Umbrellabird on one of the small trails that enter the forest from the road to the left after the Alto de Piedra school. It perched on a stick right next to the trail allowing for close inspection by the group. It was black overall, with a short bushy crest that gave its head a flat-topped appearance. It did not utter a sound, or do much apart from changing perches twice before disappearing into the foliage. Following the same trail we had a mixed flock with both Three-striped and Golden-crowned Warblers, and further in Rosabel saw a female Black-and-white Becard on another flock. 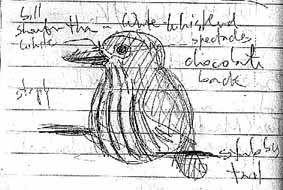 On Satuday, July 15th, 2000, the PAS group on Santa Fe walked down the main road towards the continental divide in search of a Harpy Eagle [sic] nest. Apparently the road was cut in the dry season, so now it's possible to walk it down with a little less effort. After a few kilometers we reached the first stream (the first arm of the Bulavá River), and right there, perched on a twig about 15 meters above the stream, was a Lanceolated Monklet. It was chocolate-brown above, and white below with black, fuzzy streaks. The bill was short but heavy, and all black. The eyes were also black and there was a thin white eye-ring. The white at the base of the bill (forehead, lores and chin) was seen after closer examination through José Tejada's scope. It stayed put on its perch, sometimes changing position or preening. After a while a second bird was seen perched on the same branch, about a meter before the first one. This one also remained mostly motionless but on two occasions flew up and perched right next to the first one for a short time.
On our way back from not seeing any Harpy Eagle nest we stopped briefly at the ravine, and the first Monklet was still perched on its twig. After a few minutes it took off and was not seen again. The lucky PAS members to see this rare species were Amalia Herrera, Cora Herrera, José Tejada, Karl & Rosabel Kaufmann, Chris Rhodes and Darién Montañez.
The next morning, we went up the trail to the geographical Cerro Tute in search of Snowcap. Even though we did not see it, we had some good sightings, including Purplish-backed Quail-Dove (crippling views of one, another glimpsed briefly and many more calling), Violet Sabrewing (a male seen only by José), White-tailed Emerald (a female seen by everyone but José), and a mixed flock with many Yellow-throated Bush-Tanagers, and one each of Blue-and-gold Tanager, Slaty-capped Tyrannulet and Russet Antshrike.
bare-necked umbrellabird black-and-white becard golden-crowned warbler lanceolated monklet purplish-backed quail-dove three-striped warbler white-tailed emerald yellow-throated bush-tanager